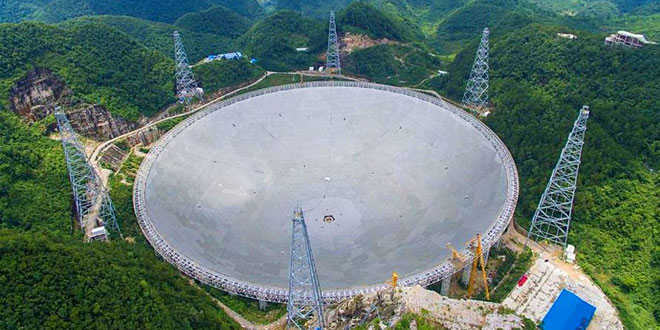 The Guinness World Records world record for the largest solar telescope is the McMath-Pierce solar telescope which opened in 1962 atop Kitt Peak in Arizona, USA. Light from the sun is collected via a 152 m long (498 ft) slanted shaft,, which directs sunlight on to a 1.6 m (5 ft 3 in) mirror, 50 m (164 ft) below ground. It forms an 85 cm (33 in) wide high-resolution image of the sun.

Guinness World Records also recognized the world record for the largest dish radio telescope; it is the partially-steerable ionospheric assembly built over a natural bowl at Arecibo, Puerto Rico, completed in November 1963. The dish has a diameter of 305 m (1000 ft) and covers 7.48 ha (18.5 acres), an area equivalent to roughly 14 American football fields.

Built at a cost of 1.2 billion yuan ($180 million), the telescope dwarfs the Arecibo Observatory in Puerto Rico as the world’s largest single-dish radio telescope, with twice the sensitivity and a reflector as large as 30 football fields, it said.

FAST will use its vast dish, made up of 4,450 panels, to search for signs of intelligent life, and to observe distant pulsars — tiny, rapidly spinning neutron stars believed to be the products of supernova explosions.

The telescope represents a leap forward for China’s astronomical capabilities and will be one of several “world-class” telescope projects launched in the next decade, said Yan Jun, head of China’s National Astronomical Observation (NAO), according to Xinhua.

In a test run before the launch, FAST detected electromagnetic waves emitted by a pulsar more than 1,300 light-years away, state media reported an NAO researcher as saying.