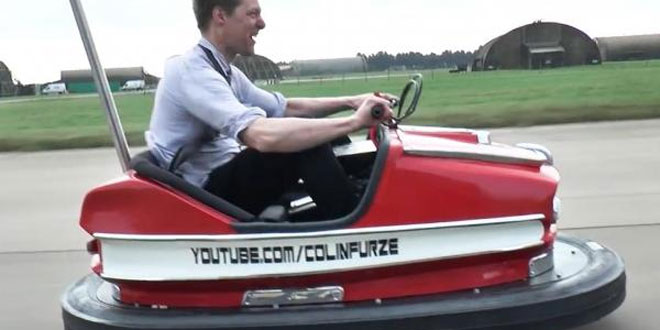 Photo: British inventor and YouTuber Colin Furze set a World Record by modifying a bumper car with a 600cc 100bhp engine, which allowed it to travel at speeds more than 100 miles per hour.

The Guinness World Records world record for the fastest motorized perambulator or ‘pram’ achieved a top speed of 53.46 mph (86.04 km/h), was built by Colin Furze (UK) and tested at Shakespeare County Raceway in Stratford-upon-Avon, UK, on 14 October 2012.

Guinness World Records also recognized the world record for the fastest lawnmower is 214.967 km/h (133.57 mph) and was constructed and raced by Per-Kristian Lundefaret (Norway) at Torp Sandefjord Airfield, Vestfold, Norway, on 5 November 2015.

British inventor and YouTuber created the world’s fastest bumper car, by fitting it with a sports bike engine.

Furze placed a 600cc 100bhp engine inside the bumper car, allowing the vehicle to travel at speeds of more than 100 miles per hour.

He was tasked to modify the bumper car for the BBC’s television series Top Gear after creating other extraordinary vehicles including a hover bike and the world’s fastest mobility scooter.

Once the vehicle was complete Furze had Top Gear driver “The Stig” drive the car along a stretch of road in hopes of setting a World Record.