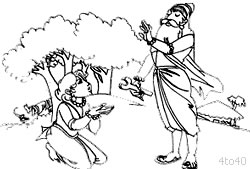 Jamadagni was a rishi. He lived a pious life with his wife Renuka. One day Renuka and the rishi were making a shivalinga from clay.

Just as they were giving in the finishing touches, Renuka’s concentration was distracted by the sound of hooves. The shadow of the Kshatriya king who rode that way fell on the shivalinga.

Rishi Jamadagni who noticed the loss of concentration of his wife was enraged. He called his eldest son.

“Your mother must be killed now,” the rishi ordered. But Jamadagni’s son refused to kill her.

The rishi then called his second son. The second son wanted to know why he should kill an innocent woman who was also his mother.

Jamadagni then called his third son. “Cut off your mother’s head now,” he ordered. The third son was Parashurama. Without a word Parashurama beheaded his mother. Jamadagni was pleased. ‘Ask for two boons and it shall be yours. I am pleased with you,” said the rishi to Parashurama.

“Father”, said Parashurama, “bring mother back to life. I know not why you wanted her beheaded but let her not remember what caused her death.”

Jamadagni granted his son’s wishes. Renuka was brought back to life.

In later years Parashurama came to be known for both his valour and anger. He lost out in a battle of strength to Rama. He handed over his weapons to Rama and renounced the world.