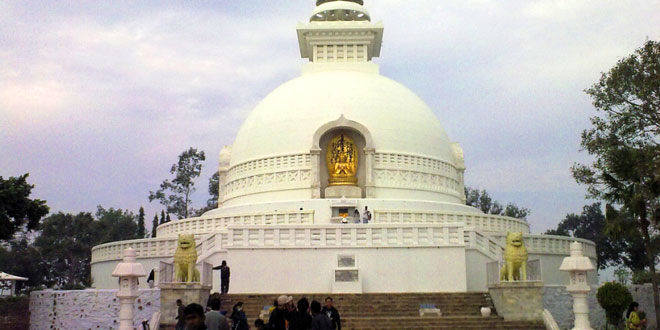 Located amidst a scenic cragged backdrop, Rajgir, a city in Nalanda district of Bihar in India, is a famous tourist destination, as well as a holy destination for many religions like Hinduism, Buddhism and Jainism. The city, surrounded by seven hills, is home to many pagodas, monasteries and temples. It is mentioned in the epics that Rajgir was known as Rajgriha as well as Pali and was the capital of the kingdom of Magadha which later on became part of the Mauryan Empire. Though this city is mentioned in engravings in ceramics and sculptures of Hinduism, Jainism and Buddhism, dating back to 1000 BC, its exact origin still remains uncertain. It is said that the great enlightened masters like Lord Buddha and Mahavir had visited and stayed at this place for a long time. The Jarasandha’s Akara (battle field) at Rajgir connects this place to Hindu epics and is an important tourist destination too. Rajgir is blessed with a tranquil environment, which makes it ideal for meditation, which is why this place has always attracted holy people like Buddha and Mahavira. Let’s learn more about this place.

Rajgir is an important pilgrimage spot for Buddhist as Gautama Buddha spent quite a few months meditating and preaching at Griddhkuta, the ‘Hill of the Vultures’. Buddha’s famous sermons was so liked by King Bimbisara of Magadha that he chose to follow Buddhism thereafter. Not only King Bimbisara but also countless others chose to convert to Buddhism and thus Rajgir became an important Buddhist centre in India. It is in the Saptparni cave located on one of the hills surrounding this city that the first Buddhist Council was held under the guidance of Maha Kassapa. The spread of Buddhism resulted in the establishment of many monasteries in this area, and also many pagodas were built, among which the Peace Pagoda or Vishwa Shanti Stupa, built in 1969, is the most important and famous one. This peace pagoda is one of the 80 peace pagodas in the world that are constructed with a noble intention of spreading the message of peace and non-violence. In Hindu epics, this is the place where Bhima confronted Jarasantha and killed him in a wrestling match that lasted 27 days. Lord Mahavira spent fourteen years at Rajgir and Nalanda.

The Vishwa Shanti Stupa or the Peace Pagoda, built by the government of Japan, is located on a high hill of 40 meters length. This marble Stupa, with four glimmering statues of Buddha, one each in every corner can be accessed either through the ropeways or by climbing around 600 steps. This place is also called GriddhKoot and is believed to be the place where Lord Buddha used to meditate and set his second wheel of law in motion and for three months, even during the rainy season, delivered several sermons to his disciples.

Venu Vana, which literally means ‘bamboo grove’, is a monastery which was donated to Lord Buddha by the King Bimbisara to reside in and was the king’s first offering to the Lord Buddha. It was at this place that Lord Buddha met people and preached to them. The peaceful and calm atmosphere here provides a divine experience and is ideal to meditate.

Jivakameavan Gardens was the seat of Jivaka, the royal physician of King Bimbisara who treated Lord Buddha when he fell ill. This garden is also a must visit for all pilgrims. The Karanda Tank is a bath tank which, it is believed, was used by the Lord Buddha to bathe.

How To Reach Rajgir

You can take a flight to Patna which is 101 kilometers away from Rajgir. Patna is connected to other major cities in India like Calcutta, Bombay, Delhi, Ranchi and Lucknow.

Rajgir railway station is the nearest rail point which is connected to major cities like Delhi, Kolkata and Patna. Another convenient rail-head is the one at Gaya, which 78 kilometers from from Rajgir.

Rajgir, with its references in epics and Holy Scriptures, is truly a city with spiritual, religious and historical importance and a trip to this place can be truly wonderful. Not only is the place a sacred destination for Buddhist but both Hindus and Jains also consider Rajgir an important pilgrimage site.