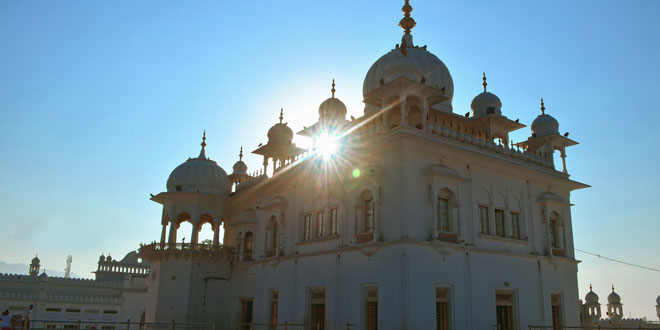 Anandpur sahib is a city and a municipal council in Rupnagar district, Punjab, India. Takht Sri Keshgarh Sahib is a gurudwara which is the main attraction at Anandpur Sahib and is one of the most important sacred places of the Sikhs. This city is strongly linked and connected to their religious traditions. Because of its rich historical and religious significance, this city is called the city of ‘spiritual or holy bliss’. Religious celebrations like Hola Mohalla are celebrated every year in the month of March. Anandpur Sahib is considered to be the second best religious place for the Sikhs after the Golden Temple at Amritsar. The city is situated on the lower spurs of the Shiwalik hills, surrounded by beautiful and colorful natural scenery, which serves as a natural attraction to the gurudwara. One can see the river Sutlej forming a beaming and lustrous blue border on the south west, barely 4 miles away. The Takht Sahib is a nice square hall with a balcony in the front overlooking a spacious courtyard on a lower level.

Anandpur Sahib was founded near the ruins of an ancient place, Makhowal, by the ninth Sikh Guru, Guru Tegh Bahadur, in 1665. The legend goes that on May 13th, 1665, Guru Tegh Bahadur went to Bilaspur to attend the mourning of Raja Dip Chand, the founder of Bilaspur state. The Dowager Rani Champa offered to give the Guru a piece of land in her state and Guru Tegh Bahadur purchased it with a payment of 2200 rupees to the Raja of Kahlur. That land consisted of the villages of Lodhipur, Mianpur and Sahota. It is then that the Guru raised a new domicile on the mound of Makhowal. The ground was then broken down by Baba Gurditta Randhawa on June 19th 1665. This new village was initially called Chakk Nanaki, after the name of his mother. The place later came to be known as Anandpur Sahib. To save Anandpur from outside threats, Guru Gobind Singh constructed five forts around the town and joined them with earthworks and secret tunnels. The construction was started in 1689 and took over 10 years to complete. In this place, Guru Gobind Singh, baptized the first five Sikhs called the Panch Pyaras, the five beloved ones, who had offered him their heads to uphold Dharma, creating the nucleus of Khalsa.

The best time to go to Anandpur Sahib is during the occasion of Holla Mohalla. It is a unique attraction of Anandpur Sahib. The city comes to life every year during this auspicious occasion. This tradition goes back to the times of the tenth Guru, Guru Gobind Singh. The guru decided that the occasion of colors, fun and frolic, be the occasion for the display of the warrior like spirit of his people. He gave the name Holla Mohalla to the festival of Holi. Each year Holla Mohalla marks the congregation of thousands of devotees from all over the country for a festival of color and gaiety. The highlight of the festival is a huge procession by the nihangs, clad in their traditional costumes and weapons. Baisakhi in 1999, at Anandpur Sahib, marked the completion of 300 years of the birth of the Khalsa. On Baisakhi day, Guru Gobind Singh baptized the Panj Pyaras at the place where Takht Sri Keshgarh Sahib stands.

Shuttle bus services for Anandpur Sahib is now being introduced which makes it convenient to commute from one place to another. The bus service is provided to and from every main city in India. There are public and private buses plying to and fro from Anandpur Sahib.

There are 2 or 3 trains from Delhi, Ambala and Chandigarh, which goes direct to Nangal, which is close by Anandpur station. There are also trains from different states. Once you reach the railway station, you can hire an auto-rickshaw or a taxi to reach the temple.

The nearest airport to this place is Chandigarh. No direct flights are available to the city.

Before the foundation of Anandpur Sahib by Guru Tegh Bahadur, this hilly place was a deserted and dreaded barren land. A legend goes that it was the abode of a Devil, Mehkasur who didn’t allow any inhabitation on this land. Ever since its foundation, Anandpur has been a city for a hub of activities and proved as a sacred lighthouse for the whole Sikh community.