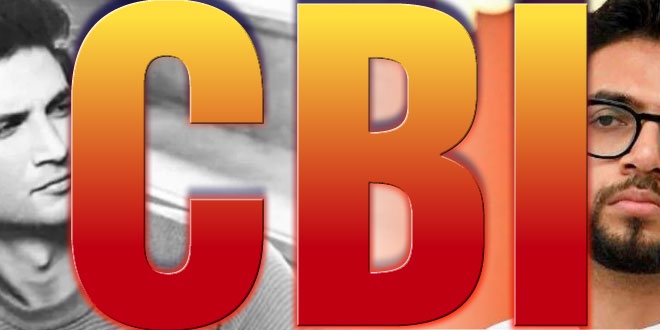 Slamming the Maharashtra govt for putting Bihar police officials under quarantine, the Supreme Court remarked, “it doesn’t give a right message. He was there to do his job”

The union govt on Wednesday told the Supreme Court that it has accepted Bihar police’s request to hand over the Sushant Singh Rajput’s death case to CBI. This has come as a big blow to the Maharashtra govt, which has been vehemently opposing handing over the case to the central agency.

Solicitor General Tushar Mehta told the apex court hat the notification for the CBI investigation will be issued soon, preferably by the end of the day. The court gave all the parties three days to place their respective stand on record. Also, the court ordered the Mumbai Police to submit a report on the investigation so far. The hearing will continue next week.

Bihar police on 4th August 2020 had submitted a request to the Center to accept the request for CBI inquiry in actor Sushant Singh Rajput’s murder case. In the request, Home Department, Government of Bihar (Police Branch) said, “In exercise of the powers conferred under section-6 of the Delhi Police Establishment Act, 1946, the Governor of Bihar is pleased to accord his consent to exercise of powers and jurisdiction to whole of Bihar and other places related to the member of Delhi Special Police Establishment to investigate / supervise and inquire into the case.” 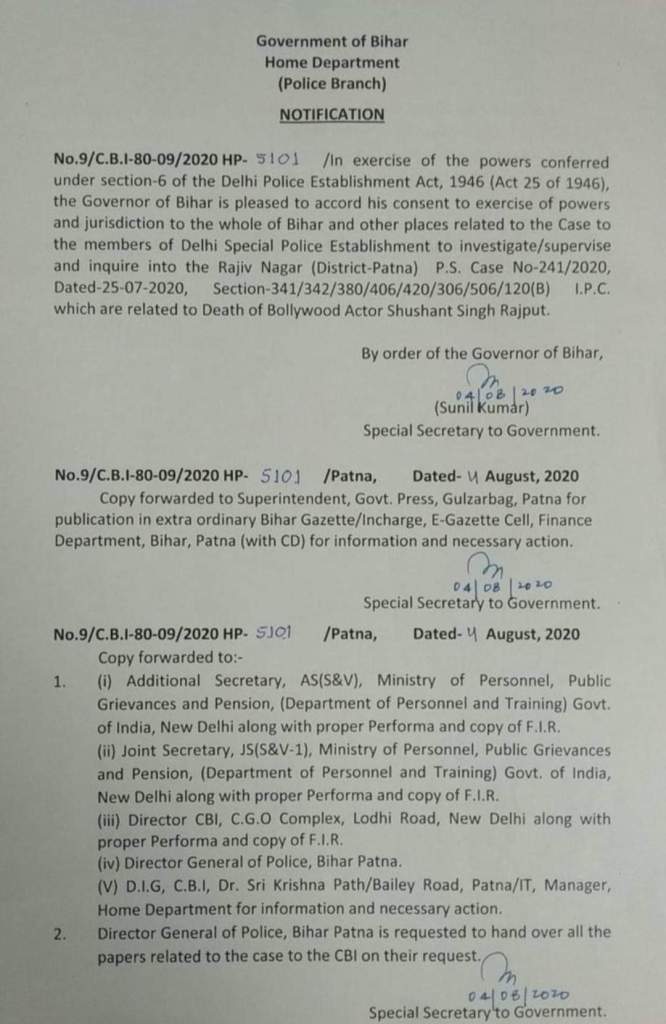 During the hearing, Rhea Chakraborty’s petition seeking direction for transfer of investigation from Patna to Mumbai, Solicitor General Tushar Mehta informed the court that the centre had accepted Bihar govt’s request recommending CBI inquiry into Sushant Singh Rajput death case. SG Mehta appeared on his own and said in court that the case is in the public domain.

SG Tushar Mehta appears for Centre in the #SupremeCourt, informs court that Union of India has in principle accepted the recommendation by #Bihar Govt to order a #CBI probe into #SushantSinghRajputCase.

SG appeared on his own, saying the matter is in public domain now.

Maharashtra Government had opposed CBI inquiry in the court. They insisted that the authorization to probe the case is with the Mumbai Police. The court said that they want to know what the Mumbai Police has done so far in the case. The court noted, ‘a very unfortunate incident has taken place. A gifted and talented artist has passed away in circumstances which are unusual. Now, the circumstances in which this death took place needs to be inquired into’.

On the action taken against the Bihar Police officials in Mumbai, Maharashtra Government told the court that they are not against Bihar Police registering an FIR. Still, there was no cause of action in Bihar. Sr Adv R Basanth representing Maharashtra government said that the whole situation has turned political. KK Singh did not file any case in Mumbai but decided to record one in Bihar.

The apex court also criticized the Maharashtra govt for not cooperating with Bihar police team in Mumbai. Slamming the state govt for putting Bihar police officials under quarantine, the court remarked, “it doesn’t give a right message. He was there to do his job. You must do everything in a professional manner. Protect all evidence.” In the reply, Sr Adv R Basanth representing Maharashtra government said that only the Mumbai Police that has duty, power and function to register the case here.

The court also noted, “we want all parties to hold their hands for the time being. Lawyers are here and I am sure they have all heard you.”

Adv Vikas Singh, appearing for Sushant’s father KK Singh, opposed the bail plea and said that the evidence is being tampered with. As now CBI inquiry has been ordered, Rhea’s plea for interim relieve does not survive in the court.

Rhea Chakraborty not protected from ARREST!