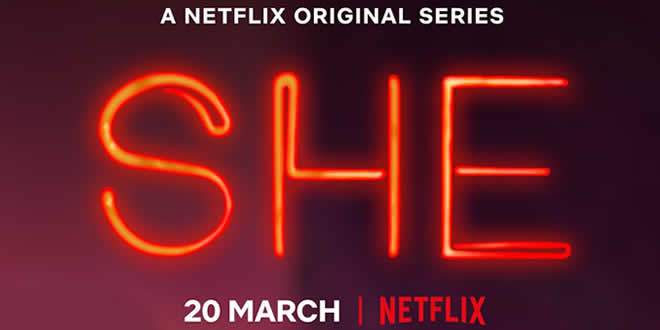 She is an Indian crime drama web television series created and written by Imtiaz Ali & author Divya Johry. Directed by Arif Ali and Avinash Das under production house Window Seat Films, the series stars Aaditi Pohankar, Vijay Varma and Vishwas Kini. It follows the story of a female constable who goes undercover to bust an underworld gang. She will premiere on Netflix on 20 March, 2020.

She follows the story of a female constable in the Indian Police Force who has been inducted in the Anti Narcotics Group to fight a major drug lord.

With She, Imtiaz Ali the, master of love and romance, who as a rule loves to quote Rumi and other Sufi poets, treads into a new territory. The netherworld of illicit sex and crime it is, which by itself, is not a bad thing. What is, that as writer and creator of this Netflix series, he carries the confusion / dilemma of his lovers into this world too. Without a doubt, the premise is interesting, even tantalizing. She is about a woman who finds herself and even dignity while masquerading as a prostitute.

A simple constable Bhumika Pardeshi (Aaditi Pohankar) is at the center of this crime thriller. How she, a diffident police person, is tasked with the responsibility of catching a dreaded narcotics smuggler forms the essence of the story. Why would the force pick up a woman low on confidence for ensnaring a dreaded drug dealer is rather inexplicable and not entirely convincing. But then as throughout the series, she is told time and again, “Tum mein kuch baat hai,” and we are reminded of her X factor. Can she beat the deadly narcotics dealer Sashya (Vijay Varma) and kingpin Nayak (Kishore Kumar G) at their own game…. is the obvious hook that takes you from one moment to another in a cat and mouse game.

Indeed, there is some fission and friction, especially in the scenes when playing the seductress she is face-to-face with her preys. Apart from the obvious face off and the trap laid for capturing the enemy, the writing, however, stays more with the discovery of Bhumika’s sexuality. This ironically is the series’strength and also its Achilles heel.

In telling moments, a woman, who is rejected by her husband for being too frigid, suddenly realises the power of her body, rather her whole being. In one of the key scenes, she even snaps at her boss Jason Fernandes (Vishwas Kini) making him wonder; has he created a monster? Will she emerge unscathed, how much of the slime and grime of the world that she is thrown into will rub upon her? Have her loyalties shifted or has she mastered the technique of survival while swimming among the sharks? These and many other questions define the new her as also up the curiosity quotient of the viewer.

Indeed, the characters here have more than one shade. Even villains are not just single note bad men. Vijay Varma, as the over-confident Sashya, is brilliant. His encounters with Bhumika, especially his demand that he will cooperate only if she is present, may seem borrowed but remain fraught with sexual tension.

Then there is enchanting ambiguity to the part of Nayak too, who is at one moment tender and at another totally ruthless. How the two are drawn to each other forms yet another mysterious angle in a series that at once is realistic and has a surreal touch to it.

Walking amidst the deadly silence, the sound of Bhumika’s stilettoes on Mumbai‘s desolate roads tell a story of their own. Without a doubt, Aaditi is nuanced in her portrayal. The way she looks at herself in the mirror, touches her own body are pregnant with meanings. Certain scenes with sexual connotations though could have been avoided.

And it is this ambivalent messaging and Ali’s trademark confusion while etching the characters, which undermine the tale of an ordinary woman leading a double life. With shorter episodes, the seven episode series, may make for an easy watch but is not exactly a fulfilling fare, at least in its first season.

Will She prove to be more than a body, however, remains to be seen in the next season as this one ends on a cliff-hanger?