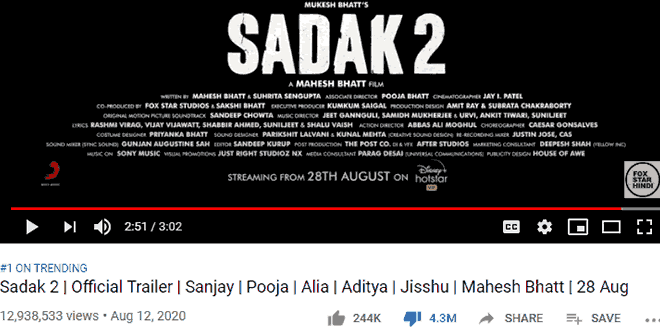 Within hours of its premiere on YouTube, the Sadak 2 trailer got over 1.3 million dislikes, making it one of the most disliked trailer on the video streaming site. The film Sadak 2 releases on Disney Hotstar VIP on August 28.

Earlier in the day, the VHP sought legal action against the Mahesh Bhatt film for hurting Hindu sentiments. The movie starring Sanjay Dutt, Alia Bhatt and Aditya Roy Kapur, revolves around the protagonist’s encounter with a “fake Sadhu”. Basically Alia’s character in the movie is out to expose a fake guru and his ashram. Sanjay Dutt’s character will help Alia in ‘exposing’ the Baba.

Notably, last month, at the time of its release, the poster of Sadak 2 had run into controversy. A complaint was filed before a court in Muzaffarpur in Bihar against the filmmakers for hurting Hindu sentiments.

However, the trailer does not seem to have gone down too well for the audience.

Many fans of Sushant Singh Rajput who smell a foul play in the actor’s untimely death in June this year left angry comments. Following his death, many had blamed the nepotism prevalent in Bollywood for pushing the talented actor over the edge. Further, Mahesh Bhatt came under fire over allegations that Sushant’s girlfriend Rhea Chakraborty was hugely influenced by Bhatt who ‘guided’ her in her relationship with the deceased actor.