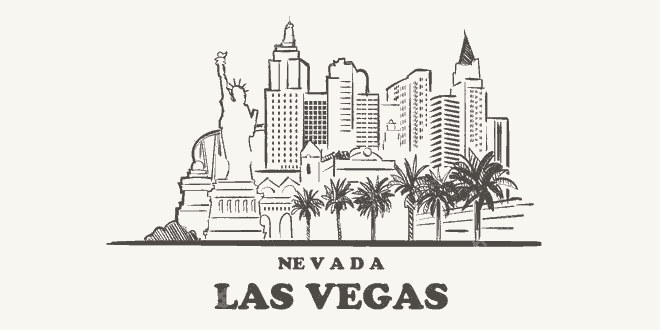 Nevada, the westernmost intermountain state, is best known for its desert climate and legalized gambling. It was first explored in the 1820s, was first settled in 1849, and became the 36th state in 1864. Bounded by California on the south and west, Oregon and Idaho on the north, and Arizona and Utah on the east, it is the seventh largest state, covering an area of 286,352 sq km (110,561 sq mi), about 85% of which is federally controlled. Only Alaska has more public land than Nevada. Nevada is a sparsely populated state, but its population growth rate is one of the highest in the United States. The state capital is CARSON CITY.

Nevada is a Spanish word meaning “snow covered.” The nickname, Silver State, recalls Nevada’s mining origins. Ranching has also been important, but its growth has been restricted by limited water resources. Tourism is now the dominant sector of the economy. The resort cities of LAS VEGAS and RENO have grown rapidly, while rural Nevada has remained sparsely populated.

Other than the SIERRA NEVADA in the extreme west and the Columbia Plateau in the far north, Nevada lies wholly within the GREAT BASIN, a plateau of isolated mountain ranges separated by arid basins. About 160 north-south-trending mountain ranges cross the state. The average elevation is 1,500 m (5,000 ft), with the state’s lowest point 143 m (470 ft) on the Colorado River to 4,006 m (13,143 ft) at Boundary Peak. Valleys between the mountains lie at high altitudes, usually at elevations of 1,200-1,800 m (3,800-6,000 ft), but somewhat lower in southern Nevada.

Except for the COLORADO RIVER flowing southwest from Colorado and Utah and the COLUMBIA RIVER watershed in the north, Nevada lies in the Great Basin area of interior drainage with only a few small permanent rivers. The Humboldt River, 467 km (290 mi), is the state’s longest. The Carson, Truckee, and Walker rivers drain the east slopes of the Sierra Nevada. Most streams in the state are ephemeral and flow only after heavy storms.

Nevada has more than 200 lakes, most of which are small reservoirs. Lake MEAD reservoir and Lake TAHOE are the largest bodies of water. During the Pleistocene Epoch (more than 10,000 years ago), about 90 rain-fed lakes dotted Nevada. The largest was Lake Lahontan, which covered about 22,450 sq km (8,670 sq mi). Its remnants, Pyramid and Walker lakes, have each experienced a surface drop of more than 25 m (80 ft) in this century as a result of upstream diversion.

With marine air blocked by its western mountains, Nevada has temperatures characteristic of a continental location: extremely cold winters and very hot summers. The topography, dry air, and clear skies result in a wide diurnal temperature range of about 20 C degrees (36 F degrees) in the valleys. Southern Nevada is a subtropical desert, with a July mean temperature of 30 deg C (86 deg F) and a January average of 6 deg C (43 deg F); the frost-free season lasts from 200 to 250 days. Northwestern Nevada is cooler throughout the year, with a January mean of -1 deg C (30 deg F) and a July average of 22 deg C (71 deg F). Almost no rain falls in summer, but snow can occur between October and May. The growing season averages 100 to 140 days. The northeast is the highest, coolest, and wettest region; its semiarid steppe climate supports sufficient vegetation for grazing, with a growing season of less than 100 days and possible frost cover in any month.

Tourism is Nevada’s greatest source of income, drawing about 30 million visitors annually to the state’s gambling facilities and scenic beauty. Principal gambling areas are Las Vegas, Reno, and Lake Tahoe, but casinos can be found in most counties. Nevada’s liberal regulations for marriage and divorce bring in nonresidents. Nevada’s best-known attractions are the nightclubs associated with the hotel-casinos. Events for tourists include rodeos, the annual Basque Festival in Elko, and the National Championship Air Races in Reno. Hunting, fishing, camping, boating, and winter sports are also popular.

The first residents of Nevada were Indians who entered the Great Basin about 12,000 years ago. Their descendants, a widely scattered hunting and gathering population, dominated the harsh region until relatively recent times, as this was the last part of the contiguous United States to be explored. The first European to see Nevada was probably Francisco Garces (1738-81), a Spanish Franciscan priest who reached the Colorado River while journeying through Spanish Mexico. In 1826, Jedediah Strong SMITH reached the Walker River and central Nevada, and the trapper Peter Skene Ogden (1794-1854) crossed the Humboldt and Carson basins in 1825. The first systematic observations of the region were made by John C. FREMONT from 1843 to 1845. In 1841 settlers journeying to the west coast began crossing the Humboldt Valley and the Forty Mile Desert, a route later followed by the Overland Stage Lines.

The Treaty of GUADALUPE HIDALGO (Feb. 2, 1848), which concluded the Mexican War, granted to the United States territory that included present-day Nevada. The Mormons founded the first permanent settlement at Genoa in the Carson Valley in 1849 and established a mission in the Las Vegas Valley in 1855. Monthly mail service across northern Nevada began in 1853. The pony express route crossed central Nevada beginning in 1860. Service continued until supplanted by the telegraph in September 1861.

Nevada’s major period of growth followed the discovery of the COMSTOCK LODE at Virginia City in 1858, a strike that yielded $386 million in silver and gold by the time production stopped in 1921. Between 1860 and 1870, the population increased from 7,000 to 42,000 residents. In 1861, Nevada Territory separated from Utah Territory. When statehood was granted on Oct. 31, 1864, President Lincoln secured the one vote needed for ratification of the 13th Amendment. The state is often referred to as having been “battle born,” and its nickname, The Silver State, was derived from its Civil War statehood and from the use of Nevada gold and silver bullion by the Union forces to obtain credit throughout the war.

The first transcontinental railroad was completed across northern Nevada in 1869, with the Central Pacific Railroad gaining the valuable freighting from the Comstock mines. Throughout the rest of the century mining camps flourished and died until, in the early 1900s, the major Tonopah and Goldfield strikes established Nevada as a major source of industrial metals. Cattle ranching began in the 1860s, and sheep raising became important in the 1870s, both activities pursued by Basques.

Water supplies have been a concern. In 1906-08,, Dr. J. E. Church of the University of Nevada developed snow survey techniques now used throughout the world to forecast snowmelt runoff. The Prior Appropriation Doctrine prevails over distributing the limited supply; water is granted to the earliest established users. In 1905 the first federal reclamation scheme was completed near Fallon to irrigate croplands with waters from the Truckee River. This caused shrinkage of Pyramid Lake and affected the fishery that supported the Indians there.

Urban growth has also increased water demands; Las Vegas has grown dramatically since 1950, and the pumping of groundwater has lowered the water table, resulting in land subsidence. Use of Colorado River water can meet the region’s immediate needs, but river rights are limited. Nevada’s future prosperity will depend on tourism and other industries that consume little water.

Rangeland suitable for the support of livestock has deteriorated despite grazing controls, partly due to the expansion of the wild horse population, which more than tripled in the first six years following passage (1971) of the protective Wild Horse and Burro Act. Such problems moved the Nevada legislature to pass the “Sagebrush Rebellion” act in 1979 authorizing the state to sue for possession of federal lands.

Minerals continue to be important, but metal extraction remains a boom and bust operation. Although the 1978 shutdown of copper mines had little effect on the overall state economy, it had a severe impact on White Pine County. Most nonmetallic minerals used in manufacturing and construction, however, are abundant. Some geothermal areas have been developed, and solar heating equipment is marketed.

Tourism remains Nevada’s most important industry, although in the 1980s efforts toward diversification of the state’s economy have met with some success. There is a continuing need for planning to control congestion, pollution, and housing costs so that Nevada can maintain a pleasant living environment.

All for Our Country