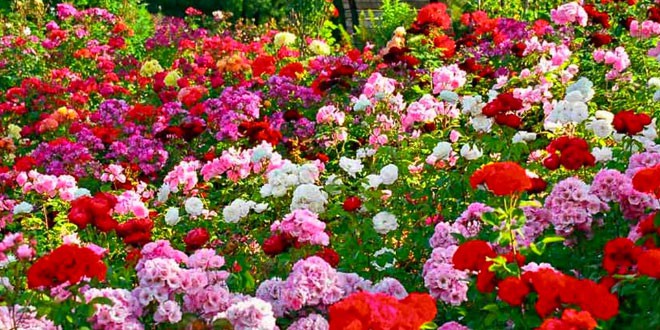 The Rose Festival of Chandigarh is one of the biggest rose shows held in India. The venue is the famous Zakir Hussein Rose Garden situated in the city of Chandigarh. The garden has over 50,000 rose plants and bushes of more than 825 varieties, delivering a spectacular visual treat. The Rose Festival is an annual and much eagerly-awaited event. The garden is open to visitors throughout the year but the festival is undoubtedly the best time to visit the place to enjoy the sight of colorful display of the largest variety of roses in one place.

The Rose Garden is named in honor of the former President of India, Dr. Zakir Hussein. It was established in 1967 by the first commissioner of Chandigarh, Mr. M S Randhawa who was also an avid horticulturist. Spread over a vast area of 40 acres plus, the garden has the distinction of being the largest Rose Garden in Asia. The rose varieties have been named after famous Indian and International personalities. You will find roses named after Queen Elizabeth of Britain, John F Kennedy, former President of the US, Indian Prime Minister Lal Bahadur Shastri, and of course the creator of the garden M S Randhawa. The garden is divided into ten sections. There is a dedicated playing plot for children within the garden

The roses here are named creatively. Some of the most popular varieties are Only You, Hippie Girl, American Heritage, Love Me Tender, Lover’s Meeting, Oklahoma, Louisiana, Delhi Prince, King’s Ransom, Canadian Centenary, Wild Plum Careless Love City of Belfast, Dorothy Peach and even Dulhan or a New Bride. The Garden also has many species of medicinal plants and shrubs.

Significance of the Rose Festival of Chandigarh

The Rose festival of Chandigarh is a major event and is held for three days. The festival is attended by people from India as well as international tourists. According to conservative estimates, about 300,000 people attend the festival every year on an average with the numbers increasing every passing year. The City of Chandigarh transforms itself to welcome the visitors with splendid decorations, light works and festivities. The festival was started to encourage people to visit and enjoy the beautiful roses and value the creations that nature has given us. The Festival also helps spread awareness about the need to preserve nature. However, the Rose Festival is not only about roses. There are lots of other entertainment features, events and competitions also held during the festival.

Date of the Rose Festival Chandigarh

The Rose Festival is held every year in the month of February, generally in the last week. This is the time when the flowers are in full bloom. While the event has been renamed as the Festival of Gardens by the local authorities, the diehard fans and locals prefer the old name.

Apart from the spectacular display of roses, the festival also hosts numerous cultural programs. Visitors can enjoy folk dances, classical dance performances, musical concerts, and exhibitions by locals. There are fun events for all age groups. Foodies can enjoy the best of local and Indian delicacies at the numerous food stalls lined at a place nearby the Rose Garden. The event sees many types of competitions such as Rose Prince and Princess, Brass and Pipe Band competition, traditional dance competitions and drawing competitions for children. Visitors can also register for participating in quiz competitions, kite flying, photography, spot painting, song fest, and many other events. Audiences are also entertained by variety programs such as comedy shows and short plays. There is also a unique and exciting flower cutting and arrangement contest.

By Road: Chandigarh is easily accessible by road and is well-connected to other cities by National Highway 21 and 22. Buses run at fairly regular frequency from Delhi and Punjab.

By Train: Chandigarh Railway Station is well connected to major cities of India with trains running on a daily basis through the station to most parts of the country.

By Air: Chandigarh Airport is 12 km from the main city and connects well with direct flights to Delhi, Amritsar and other major cities.