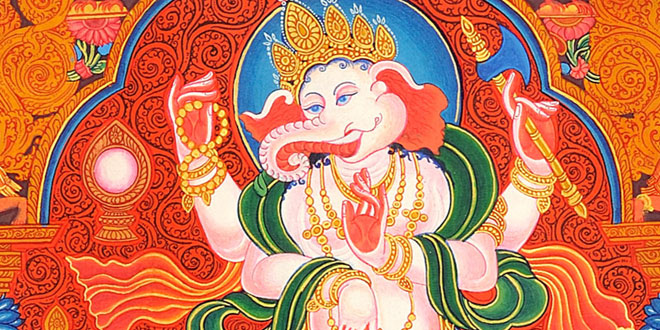 Ganesh Chaturthi (Birthday of Lord Ganesh) is one of the most popular of Hindu festivals. This is the birthday of Lord Ganesha and is known as the day most sacred to Lord Ganesha. It falls on the 4th day of the bright fortnight of Bhadrapada (August – September). It is observed throughout India, as well as by devoted Hindus in all parts of the world.

Lord Ganesha is the elephant-headed God. He is worshiped first in any prayers. His Names are repeated first before any auspicious work is begun, before any kind of worship is begun. He is the Lord of power and wisdom. He is the eldest son of Lord Shiva and the elder brother of Skanda or Kartikeya. By worshiping Lord Ganesha mothers hope to earn for their sons the sterling virtues of Ganesha. 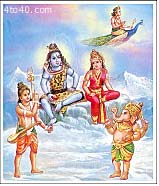 Once upon a time, the Goddess Gauri (consort of Lord Shiva), while bathing, created Ganesha as a pure white being out of the mud of Her Body and placed Him at the entrance of the house. She told Him not to allow anyone to enter while she went inside for a bath. Lord Shiva Himself was returning home quite thirsty and was stopped by Ganesha at the gate. Shiva became angry and cut off Ganesha’s head as He thought Ganesha was an outsider.

When Gauri came to know of this she was sorely grieved. To console her grief Shiva ordered His servants to cut off and bring to Him the head of any creature that might be sleeping with its head facing north. The servants went on their mission and found only an elephant in that position. The sacrifice was thus made and the elephant’s head was brought before Shiva. The Lord then joined the elephant’s head onto the body of Ganesha.

Lord Shiva made His son worthy of worship at the beginning of all undertakings, marriages, expeditions, studies, etc. He ordained that the annual worship of Ganesha should take place on the 4th day of the bright half of Bhadnpada.

Without the Grace of Sri Ganesha and His help nothing whatsoever can be achieved. No action can be undertaken without His support, Grace or blessing.

In his first lesson in the alphabet a Maharashtrian child is initiated into the Mantra of Lord Ganesha, Om Sri Ganeshaya Namah. Only then is the alphabet taught.

Ganesh Chaturthi is the most important of all Maharashtrian festivals, and is celebrated with great aplomb amongst Marathi communities worldwide. On the occasion of the Ganapati festival a large number of images are made of all possible sizes, and people buy them to keep in their houses as a divine guest for one and a half, five, seven, or ten days, after which the image is taken out ceremoniously and thrown into the river, sea or well for immersion or “Visarjan”. The idol should not be kept after this day, as it is considered inauspicious.

The Puja can be a simple one performed with family members within the household and to the accompaniment of a cassette of Shri Ganesh mantras, or an elaborate one, involving a priest who would come home and perform the puja. ‘Modak’ is the most famous and most typical food preparation of Ganesh Chaturthi celebrations.

As long as the Ganesh idol is at home, Aarti is performed morning and evening (dusk, or at the hour when artificial lamps are lighted in the house). At the same time, all the members present throw Kumkum on the idol.

After the Aarti, flowers, Haldi and Kumkum are offered to the women, and Prasad (made of dried desiccated coconut mixed with castor sugar) is distributed to all those present. During Ganesh Chaturthi, Aarti is performed five times: to the Ganesh idol, followed by Vitthal, Shankar (Shiva), Devi (Parvati) and Dattatreya (Kartikeya). The Aarti ends with a “Mantra Pushpanjali”.

During the festivals day’s beautifully sculpted Ganesh idols are installed in the Mandaps (large tents) that are colourfully decorated, depicting religious themes or current events. There are huge public displays of Ganesh idols with Aarti (song of devotion to God) and loud music and dancing by the devotees.

This activity is most popular in Bombay and Pune, with “Shrimant Dagadu Shet Halwai Ganapati” in Pune being the main attraction of the Utsav. Many cultural events are organised and people participate in them with keen interest. On the tenth day, huge processions carry images of the God to be disposed off into the water, hoping for them to return early next year. When the idols are immersed in the water, people sing, “Ganpati Bappa Morya, Agle Baras To Jaldi Aa” (“Father Ganpati, Next Year Come Again“).