Winston Churchill — Sir Winston Leonard Spencer-Churchill, KG, OM, CH, TD, DL, FRS, RA (30 November 1874 – 24 January 1965) was a British politician who was the Prime Minister of the United Kingdom from 1940 to 1945 and again from 1951 to 1955. Widely regarded as one of the greatest wartime leaders of the 20th century, Churchill was also an officer in the British Army, a historian, a writer (as Winston S. Churchill), and an artist. He won the Nobel Prize in Literature, and was the first person to be made an honorary citizen of the United States.

The political history of the twentieth century can be written as the biographies of six men: Lenin, Stalin, Hitler, Mao Zedong, Fraklin Roosevelt, and Winston Churchill. The first four were totalitarians who made or used revolutions to create monstrous dictatorships. Roosevelt and Churchill differed from them in being democrats. And Churchill differed from Roosevelt – while both were war leaders, Churchill was uniquely stirred by the challenge or war and found his fulfillment in leading the democracies to victory. 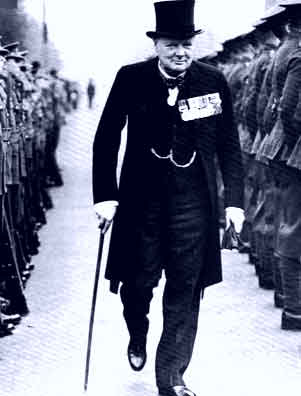 Churchill came of a military dynasty. His ancestor John Churchill had been created first Duke of Marlborough in 1702 for his victories against Louis XIV early in the War of the Spanish Succession. Churchill was born in 1874 in Blenheim Palace, the house built by the nation for Marlborough. As a young man of undistinguished academic accomplishment – he was admitted to Sandhurst after two failed attempts – he entered the army as a cavalry officer. He took enthusiastically to soldiering (and perhaps even more enthusiastically to regimental polo playing) and between 1895 and 1898 managed to see three campaigns: Spain’s struggle in Cuba in 1895, the North-West Frontier campaign in India in 1897, and the Sudan campaign of 1898, where he took part in what is often described as the British army’s last cavalry charge, at Omdurman. Even at twenty-four, Churchill was steely: “I never felt the slightest nervousness”, he wrote to his mother. “[I] felt as cool as I do now”. In Cuba he was present as a war correspondent, and in India and the Sudan he was present both as a war correspondent and as serving officer. Thus he revealed two other aspects of his character: a literary bent and an interest in public affairs.

He was to write all his life. His life of Marlborough is one of the great English biographies, and The History of the Second World War helped win him a Nobel Prize for literature. Writing, however, never fully engaged his energies. Politics consumed him.

His father, Lord Randolph Churchill, was brilliant political failure. Early in life, Winston determined to succeed where his father has failed. His motives were twofold. His father had despised him. Writing in August 1893 to Winston’s grandmother, the dowager Duchess of Marlborough, he said the boy lacked “cleverness, knowledge, and any capacity for settled work. He has a great talent for show-off, exaggeration, and make-believe”. His disapproval surely stung, but Churchill reacted by venerating his father’s memory. Winston fought to restore his father’s honor in parliament (where it had been dented by the Conservative Party). Thirty years after Lord Randolph’s death, Winston wrote, “All my dreams of comradeship were ended. There remained for me only to purse his aims and vindicate his memory”.

Churchill entered Parliament in 1901 at age twenty-six. In 1904 he left the Conservative Party to join the liberals, in part out of calculation: the Liberals were the coming party, and in its ranks he soon achieved high office. He became Home Secretary in 1910 and First Lord of the Admiralty in 1911. Thus it was as political head of the Royal Navy at the outbreak of the First World War in 1914 that he stepped onto the world stage.

A passionate believer in the navy’s historic strategic role, he immediately committed the Royal Naval Division to an intervention in the Flanders campaign in 1914. Frustrated by the stalemate in Belgium and France that followed, he initiated the Allie’s only major effort to outflank the Germans on the Western Front by sending the navy, and later a large force of the army, to the Mediterranean. At Gallipoli in 1915, this Anglo-French force struggled to break the defenses that blocked access to the Black Sea. It was a heroic failure that forced Churchill’s resignation and led to his political eclipse.

It was effectively to last nearly twenty-five years. Despite his readmission to office in 1917, after a spell commanding an infantry battalion on the Western Front, he failed to reestablish the reputation as a future national statesman he had won before the war. Dispirited, he chose the issue of the Liberal Party’s support for the first government formed by the Labour Party in 1924 to rejoin the Conservatives, after a spell when he had been out of Parliament altogether. The conservative Prime Minister appointed Churchill Chancellor of Exchequer, but when he returned the country to the gold standard, it proved financially disastrous, and he further weakened his political positions by opposing measures to grant India limited self-government. He reigned office in 1931 and entered what appeared to be a terminal political decline.

Churchill was truly a romantic, but also truly a democrat. He had returned to the gold standard, for instance, because he cherished, for romantic reasons, Britain’s status as a great financial power. He had opposed limited self-government to India because he cherished, for equally romantic reasons, Britain’s imperial history. It was to prove more important that as a democrat, he was disgusted by the rise of totalitarian systems in Europe. In 1935 he warned the House of Commons of the importance not only of “self-preservations but also of the human and the world cause of preservation of free governments and of Western civilization against the ever advancing sources of authority and despotism”. His anti-Bolshevik policies had failed. By espousing anti-Nazi policies in his wilderness years between 1933 and 1939, he ensured that when the moment of final confrontation between Britain and Hitler came in 1940, he stood out as the one man in whom the nation could place its trust. He had decried the prewar appeasement policies of the Conservative leaders Baldwin and Chamberlain. When Chamberlain lost the confidence of parliament, Churchill was installed in premiership.

His was bleak inheritance. Following the total defeat of France, Britain truly, in his words, “stood alone”. It had no substantial allies, for much of 1940, lay under threat of German invasion and under constant air attack. He nevertheless refused Hitler’s offer of peace, organized a successful air defense that led to the victory of the Battle of Britain, and meanwhile sent most of what remained of the British army, after its escape from the humiliation of Dunkirk, to the Middle East to oppose Hitler’s Italian ally, Mussolini.

This was one of the boldest strategic decisions in the history. Convinced that Hitler could not invade Britain while the Royal Navy and its protecting Royal Air Force remained intact, he dispatched the army to a remote theater of war to open a second front against the Nazi alliance. Its victories against Mussolini during 1940-41 both humiliated the infuriated Hitler, while its intervention in Greece, to oppose Hitler’s invasion of the Balkans, disrupted the Nazi Dictator’s plan to conclude Germans conquests in Europe by defeating Russia.

Churchill’s tendency to conduct strategy by impulse infuriated his advisers. His chief of staff, Alan Brooke, complained that everyday Churchill had ten ideas, only one of which was good – and he did not know which one. Yet Churchill the romantic showed acute realism in his reaction to Russia’s predicament. He reviled communism. Required to accept a communist ally in a struggle against a Nazi enemy, he did so not only willingly but generously. He sent a large proportion of Britain’s war production to Russia by Arctic convoys, even at a time when the convoys from America to Britain, which alone spared the country starvation, suffered devastating U-boat attacks. 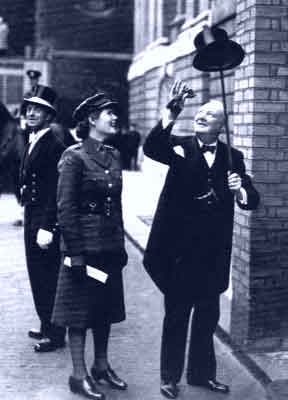 From the outset of his premiership, Churchill, half American by birth, had rested his hope of ultimate victory in U.S. intervention. He had established a personal relationship with President Roosevelt that he hoped would flower into a war-winning alliance Roosevelt’s reluctance to commit the U.S. beyond an association “short of war” did not dent his optimism. He always hoped events would work his way. The decision by Japan, Hitler’s ally, to attack the American Pacific fleet at Pearl Harbor on December 7, 1941, justified his hopes. That evening he confided to himself, “So we had won after all”.

America’s entry into the Second World War marked the high point of Churchill’s statesmanship, Britain, demographically, industrially, and financially, had entered the war weaker than either of its eventual allies, the Soviet Union and the U.S. Defeat in 1940 had weakened it further, as had the liquidation of its international investments to fund its early year efforts. During 1942, the prestige Britain had won as Hitler’s only enemy allowed Churchill to sustain parity of leadership in the anti-Nazi alliance with Roosevelt and Stalin.

Churchill understandably exulted in the success of the D-Day invasion when it came in 1944. By then it was the Russo-American rather than the Anglo-American nexus, however, that dominated the alliance, as he ruefully recognized at the last Big Three conference in February 1945. Shortly afterward he suffered the domestic humiliation of losing the general election and with it the premiership. He was to return to power in 1952 and remain until April 1955, when ill health and visibly failing powers caused him to resign.

It could have been kinder to his reputation had he not returned. He was not a effective peacetime Prime Minister. His name had been made, and he stood unchallengeable, as the greatest of all Britain’s war leaders. It was not only his country, though that owed him a debt. So too did the world of free men and women to whom he had made a constant and inclusive appeal in his magnificent speeches from embattled Britain in 1940 and 1941. Churchill did not merely hate tyranny, he despised it. The contempt he breathed for dictators – renewed in his Iron Curtain speech at Fulton, Missouri, at the Outset of the Cold War – strengthened the West’s faith in the moral superiority of democracy and the inevitability of its triumph.