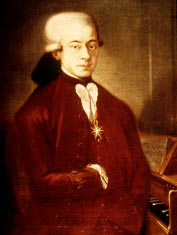 Perhaps the greatest musical genius who ever lived, Wolfgang Amadeus Mozart was born in Salzburg, Austria, Jan. 27, 1756, the son of Leopold Mozart, concertmaster at the archiepiscopal court, and his wife, Anna Maria Pertl.

Leopold Mozart was a successful composer and violinist, whose famous treatise on violin playing (Versuch einer grundlichen Violinschule) was first printed in 1756. In 1763, Leopold was made vice-Kapellmeister at the Salzburg court, whose sympathetic archbishop, Sigismund von Schrattenbach, appreciated and encouraged the activities of Leopold and his children.

Wolfgang was the greatest musical child prodigy who ever lived. He began composing minuets at the age of 5 and symphonies at 9. His father took him on a series of concert tours together with his sister, Maria Anna, born four and one-half years before Wolfgang; she, too, was a child prodigy. Both played the keyboard, but Wolfgang became a violin virtuoso as well.

In 1762 the Mozart children played at court in Vienna; the Empress MARIA THERESA and her husband, Emperor FRANCIS I, received the Mozarts cordially. During a large European concert tour (1763-66) the Mozart children displayed their talents to audiences in Germany, in Paris, at court in Versailles, and in London (where Wolfgang wrote his first symphonies and was befriended by Johann Christian BACH, whose musical influence on Wolfgang was profound). In Paris, Wolfgang published his first works, four sonatas for clavier with accompanying violin (1764). In 1768 he composed his first opera, La finta semplice, for Vienna, but intrigues prevented its performance, and it was first presented a year later at Salzburg. In 1769-70, Leopold and Wolfgang undertook a tour through Italy, where, in Rome, Wolfgang wrote down Allegri’s Miserere from memory after one hearing. This first Italian trip culminated in Wolfgang’s new opera, Mitridate, re di Ponto, composed for Milan. In two further Italian journeys Wolfgang wrote two more operas for Milan, Ascanio in Alba (1771) and the impressive Lucio Silla (1772).

In 1772, Archbishop von Schrattenbach died, to be succeeded by Hieronymus von Colloredo. The latter, at first sympathetic to the Mozarts, later became irritated by Wolfgang’s prolonged absences and stubborn ways. In 1772, von Colloredo retained Wolfgang as concertmaster at a token salary. In this capacity Mozart composed a large number of sacred and secular works. Wishing to secure a better position outside Salzburg, he obtained permission to undertake another journey in 1777. With his mother he traveled through Germany to France, where he composed the well-known Paris Symphony (1778); he could find no permanent position, however. His mother died in Paris.

When he returned to Salzburg he was given the position of court organist (1779) and produced a splendid series of church works, including the famous “Coronation” Mass. He received a commission to compose a new opera for Munich, Idomeneo (1781), which proved that he was a consummate master of opera seria (see OPERA). Wolfgang was summoned by von Colloredo to Vienna in 1781 and after a series of violent arguments was dismissed from the archbishop’s service.

Mozart’s career in Vienna began promisingly, and he was soon (1782) commissioned to write The Abduction from the Seraglio, a SINGSPIEL, for the Court Opera. His concerts were a great success, and the emperor, JOSEPH II, encouraged him, later (1787) engaging him as court composer at a modest salary. Mozart’s works were now in constant demand by amateur and publisher. In 1782 he married Constanze Weber from Germany (Mozart had fallen in love with her sister, Aloysia, at Mannheim in 1777-78), much to his father’s dismay. The young pair visited Salzburg in 1783; there, the Kyrie and Gloria of Mozart’s great Mass in C minor, composed in Vienna and destined to remain unfinished, were performed.

Mozart’s greatest success was THE MARRIAGE OF FIGARO (1786), composed for the Vienna Opera. The great piano concertos and the string quartets dedicated to his “dear friend” Joseph HAYDN, whom he had long admired and had first met in 1781 at Vienna, were also composed during this period.

Mozart’s fame began to wane after Figaro. The nobility and court grew increasingly nervous about his revolutionary ideas (as exemplified in Figaro; Beaumarchais’s original play was still banned in Austria when the opera was being given), and his new musical style was not understood by many. He sank into debt and was assisted by a brother Freemason, Michael Puchberg (Mozart had joined the Masons in 1784 and remained an ardent member until his death). His greatest operatic success after Figaro was DON GIOVANNI (1787), composed for Prague, where Mozart’s art was especially appreciated. This was followed in 1790 by Cosi fan tutte, the third and final libretto provided by the Italian poet Lorenzo DA PONTE; and in 1791 by THE MAGIC FLUTE, produced by a suburban theater in Vienna. During this period of financial strain, Mozart composed his last three symphonies (E flat, G minor, and the Jupiter in C) in less than 7 weeks (summer 1788); these had been preceded by a great series of string quintets, including in particular the two in C and in G minor (1787).

In 1791, Mozart was commissioned to write a requiem (unfinished). He was at the time quite ill–he had never known very good health–and imagined that the work was for himself, which it proved to be. His death, on Dec. 5, 1791, which gave rise to false rumors of poisoning, is thought to have resulted from kidney failure. After a cheap funeral at Saint Stephen’s Cathedral, he was buried in an unmarked grave at the cemetery of Saint Marx, a Vienese suburb. Much has been made of this, but at that time such burial was legally required for all Vienese except those of noble or aristocratic birth.

Mozart excelled in every form in which he composed. His contemporaries found the restless ambivalence and complicated emotional content of his music difficult to understand. Accustomed to the light, superficial style of ROCOCO MUSIC, his aristocratic audiences could not accept the complexity and musical depth of much of Mozart’s music. Yet, with Joseph Haydn, Mozart perfected the grand forms of symphony, opera, string quartet, and concerto that marked the CLASSICAL PERIOD IN MUSIC. In his operas Mozart’s uncanny psychological insight, particularly into his female characters, is unique in musical history. His music informed the work of the later Haydn and of the next generation of composers, most notably BEETHOVEN. The brilliance of his work continued until the end, although darker themes of poignancy and isolation grew more marked in the last five or six years of his short life. Couched as they are in a language of shining technical perfection, his compositions continue to exert a particular fascination for musicians and music lovers.