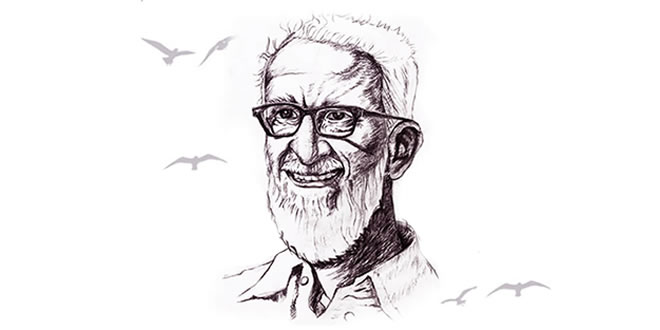 Salim Moizuddin Abdul Ali — Bang! A bird fluttered for seconds and fell to the ground. A ten-year old bespectacled boy, who had shot the bird, ran and picked it up. The bird looked like a house sparrow but, to the boy’s surprise, it had a yellow patch on its throat. Puzzled, the boy took the sparrow to his uncle, Amiruddin Tyabji, a big game hunter, and asked him what kind of bird it was. His uncle did not know, but took the boy to the office of the Bombay Natural History Society, a tiny room in a huge building in Apollo Street. The boy was introduced to W. S. Millard, the honorary secretary of the society.

Millard was amused to find an Indian boy keen to know the kind of sparrow he had bagged. He took him around the room, showing the many varieties of stuffed birds preserved there. One after another, drawers were opened and birds were displayed to the boy, who had not even imagined that so many kinds of them existed.

He gasped when Millard opened a drawer which contained a large variety of sparrows. Examining carefully, Millard picked up one and showed it to the boy. Sure enough, the bird was exactly like the one he had brought with him – a yellow throated sparrow.

“Uncle Millard”, the boy exclaimed, “I didn’t know there were so many kinds of birds! I wish to learn about them all”!

Millard smiled and nodded. He had till then not seen so much enthusiasm about birds even in an adult. Thereafter, the boy became a frequent visitor to that office. He began to learn how to identify a bird and stuff it for preservation.

The boy was Salim Moizuddin Abdul Ali, better known as Salim Ali, bird watcher extraordinary. Born on November 12, 1896, Salim Ali, now in his late eighties, is even today as interested in birds as he was when he was first introduced to Millard. He is a recipient of the J. Paul Getty Wild Life Conservation Prize for his contributions to ornithology, the study of birds. He was won several national honours and awards as well.

Surprisingly, Salim Ali has no university degree. Although he joined collage, his intense dislike of algebra and logarithm did not allow him to continue his studies. He left for Burma to help his brother in wolfram mining. But here again he proved a failure. In the jungles of Burma he looked for birds instead of wolfram.

When he returned home he did a course in zoology and was appointed a guide at the museum of the Bombay Natural History Society. For some advanced training in stuffing and skinning of birds he went to Germany. But when he returned a year later, he found himself on the streets. For lack of funds his post in the museum had been abolished in his absence.

Salim Ali was a married man and badly needed a job. But the best he could hope for was a clerk’s post and that would leave him little time to pursue his interest in birds. Luckily, his wife had a small income and could support him. They moved to a small house at Kihim, across the harbour.

It was quite place set in the midst of trees. When the monsoon came that year, Salim Ali found a colony of weaver birds on a tree near his house. Not much was known about weaver birds then and it was a golden opportunity for Salim Ali to study them. For three or four months he patiently watched the activities in the colony for hours on end. The publication of his findings in 1930 brought him recognition in the field of ornithology and he won high acclaim.

The months he had spent watching the weaver birds also taught Salim Ali the importance of making first-hand observations and not to accept blindly the notions of any one, however famous. He checks his observations several times and does not jump to conclusions. This has given his opinions great authority and sometimes brought him into confrontation with others considered to be doyens among ornithologists.

A famous instance was his observations on the growth of the tail feathers of the racket-tailed drongo. A leading ornithologist claimed that Salim Ali’s observations were wrong. But, eventually, Salim Ali was proved right. His discovery of Finn’s Baya is also a major one. This bird was believed to have been extinct for 100 years until he discovered it in the Kumaon hills.

As a boy Salim Ali had felt the need for a good book on Indian birds. The few books then available were without illustrations and contained long, dull descriptions, which were more likely to kill than kindle interest in birds, especially among young readers. In 1941 he tired to remedy this. The Book of Indian Birds that he wrote contained lively descriptions and colored pictures of every species. It made spotting a bird easy for the layman.

In 1948 he began an ambitious project in collaboration with S. Dillon Ripley, an ornithologist of international repute, to bring out in ten volumes Handbook of the Birds of India and Pakistan. The work contains all that is known of birds of the subcontinent, their appearance, where they are generally found, their breeding habits, migration and what remains to be studied about them.

Salim Ali has traveled all over the country on his bird-watching surveys. It is claimed that there is hardly a place in the country where his heavy rubber shoes have not left their mark.

According to the observations of Salim Ali, in a weaver bird colony the chief architects and craftsmen are always the males. Using paddy leaves and coarse grass they choose the site and start weaving their bottle-shaped nests. When the nests are almost ready, the females arrive and each chooses one nest after due inspection.

The female bird helps in giving the finishing touches to the nest and then lays eggs. As it sits brooding over them, the male leaves her and starts weaving another nest. When it nears completion, another female arrives and the two live together till the female begins brooding over the eggs. The male may then again leave her and start weaving another nest.

Thus a male weaver bird has two or more families at the same time. It, however, wisely restricts itself to weaving the nests. The job of feeding the brood is left to the females.