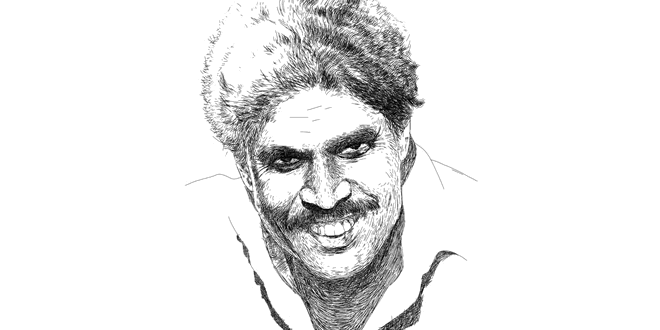 Kapil Dev — Kapil Dev Nikhanj was India’s finest all rounder in cricket. He was born on 6th January 1959 in Haryana. He was the former captain and new national team coach.

When Kapil was just 20, he set a new record of scoring 1000 runs and taking 100 wickets. He made this record within a period of one year and 109 days only. Kapil Dev started playing in the first class cricket in 1975, and the opportunity for him to play in a test match for the first time came in 1978 during Indian team’s tour to Pakistan.

He also achieved the unique double of 4000 runs and 400 wickets, the first ever Indian player to do so. He also set the world record for taking the highest number of wickets (432) in test matches in February 1994. Indian government honored him with the ‘Padmabhushan’ award. Kapil Dev has written his autobiography under the title ‘By God’s Decree’.

Kapil Dev Ramlal Nikhanj (born 6 January 1959, Chandigarh), better known as Kapil Dev, is a former Indian cricketer who was regarded as one of the greatest all-rounders to have played the game, and was named by Wisden as the Indian Cricketer of the Century in 2002. His most famous achievements were captaining India to their first and only World Cup title in 1983, and holding the record for the most Test match wickets, between 1994 and 1999. In 1991, he was awarded the Padma Bhushan.

Kapil Dev was a right-arm pace bowler noted for his graceful action and potent outswinger, and was India’s main strike bowler throughout most of his career. He also developed a fine inswinging yorker during the 1980s which he used very effectively against tailenders.

As a batsman he was a natural striker of the ball who could hook and drive effectively. A naturally aggressive player, he often helped India in difficult situations by taking the attack to the opposition.

His nickname was The Haryana Hurricane – he used to represent the Haryana cricket team, although he is himself a Punjabi.

Kapil made his international cricket debut against Pakistan at Faisalabad in 1978-79 and became an instant success with the Indian masses when he hit two clean sixes on his way to his first half-century in the 3rd Test of that series. When Pakistan returned for a six-Test series in 1979-80, Kapil was the man of the series and the main factor behind the 2-0 win for India. More success followed in the next season in Australia, where he helped India defend a small second-innings score at Melbourne against a formidable Australian batting line-up. He was the man of the series against England, both in the home series of 1981-82 as well as the “away” series in 1982. Following India’s disastrous tour of Pakistan in 1982-83, he was appointed the captain and within a few months of taking over the captaincy from Sunil Gavaskar, he led India to the World Cup win of 1983. His best bowling analysis of 9/83 came the same year against West Indies at Ahmedabad.

Kapil lost the captaincy in early 1984 to Sunil Gavaskar. He regained it in March 1985 and guided India on a Test series win over England on their tour in 1986. This period saw one of the most famous matches played during his reign, the second Tied Test in which he was named joint-man of the match with Dean Jones. In the 1987 Cricket World Cup he faced the blame for India’s loss to England in the semi-final, as he holed out to deep mid-wicket triggering a collapse that led to the unexpected loss. He did not captain India again.

The captaincy period was on the whole a difficult one for him as it was mired with reports of differences with Gavaskar, as well as his own inconsistent form as a bowler. However, both men have since insisted that these reports were exaggerated.

By the end of 1983, Kapil already had about 250 Test wickets in just five years and looked well on his way to becoming one of the most prolific wicket-takers ever. However, following knee surgery in 1984, his bowling declined as he lost some of his majestic jump at the crease. He continued to be effective, if not devastating, for another ten years and became the second bowler ever to take 400 wickets in Test cricket in 1991-92. In early 1994, he became the highest Test wicket-taker in the world, breaking the record held by Sir Richard Hadlee. Kapil’s record was broken by Courtney Walsh in 1999.

Kapil is the only player to have achieved the all-rounder’s double of 4,000 Test runs and 400 Test wickets.

At his best, Kapil was one of the world’s most destructive batsmen. During the Test match series against Pakistan in 1982-83, he demolished Abdul Qadir’s leg spin, which the English and Australian batsmen had great difficulty in reading earlier in the same year.

He was also fearless in attacking the world’s best fast-bowlers. During a World Cup match against the West Indies in 1983, he drove Michael Holding straight over his head for a six, a shot that would have been considered unimaginable by most against a bowler of Holding’s pace.

In a match on route to the World Cup final of 1983, Kapil smashed a captain’s knock of 175 not out against Zimbabwe helping India recover from an extremely poor start. India had collapsed to 9/4 when Kapil came in to bat, and were reduced further to 17/5. His 175 not out turned the game completely in India’s favor and was at the time the highest-ever individual score in ODI cricket. It was also the first ODI century by an Indian. Surprisingly, it was also Kapil’s only ODI hundred.

Another memorable incident relates to a Test match against England in 1990. When India needed 24 runs to save the follow-on with only one wicket remaining, Kapil met that target by hitting four consecutive sixes off Eddie Hemmings. This proved to be the right decision, as in the next over itself, the number 11 batsman Narendra Hirwani was dismissed with no further addition to the score.

A further example of his competitive spirit was during a match against West Indies at Sharjah in November 1986, when he tried to cajole Viv Richards into bowling the last over of the match with India needing 36 runs to win. Unsurprisingly, Richards did not give in to his request.

Kapil’s batting talent and competitive spirit were evident until as late as 1992, when during a Test match against South Africa, he counter-attacked Allan Donald and the rest of the South African pace attack on his way to his final Test century, an outstanding 129 out of a total of 215. The next highest score was only 17 and none of the top six batsmen got into double figures.

Kapil retired from playing cricket in 1994. After spending a few years away from cricket, he was appointed coach of the Indian national cricket team in 1999 succeeding Anshuman Gaekwad. However, his tenure was not a success and he resigned from the post in 2000.