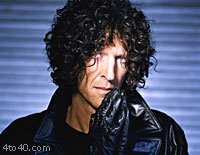 Howard Stern — Howard Allan Stern (born January 12, 1954) is an American radio personality, television host, author, actor, and photographer best known for his radio show, which was nationally syndicated from 1986 to 2005. He gained wide recognition in the 1990s where he was labeled a “shock jock” for his outspoken and sometimes controversial style. Stern has been exclusive to Sirius XM Radio, a subscription-based satellite radio service, since 2006. The son of a former recording and radio engineer, Stern wished to pursue a career in radio at the age of five. While at Boston University he worked at the campus station WTBU before a brief stint at WNTN in Newton, Massachusetts.

He developed his on-air personality when he landed positions at WRNW in Briarcliff Manor, WCCC in Hartford and WWWW in Detroit. In 1981, he was paired with his current newscaster and co-host Robin Quivers at WWDC in Washington, D.C. Stern then moved to WNBC in New York City in 1982 to host afternoons until his firing in 1985. He re-emerged on WXRK that year, and became one of the most popular radio personalities during his 20-year tenure at the station. Stern’s show is the most-fined radio program, after the Federal Communications Commission (FCC) issued fines to station licensees for allegedly indecent material that totaled $2.5 million. Stern has won Billboard’s Nationally Syndicated Air Personality of the Year award eight times, and is one of the highest-paid figures in radio.

Stern describes himself as the “King of All Media” for his ventures outside radio. Since 1987, he has hosted numerous late night television shows, pay-per-view events and home video releases. He embarked on a five-month political campaign for Governor of New York in 1994. His two books, Private Parts (1993) and Miss America (1995), spent 20 and 16 weeks respectively on The New York Times Best Seller list. The former was adapted into Private Parts (1997), a biographical comedy film that starred Stern and his radio show staff that earned $41.2 million in domestic revenue. Stern performs on its soundtrack which topped the Billboard 200 chart.

Stern was born on January 12, 1954 into a Jewish family who lived in Jackson Heights, Queens in New York City. His parents Ben and Ray (née Schiffman) are children of Austro-Hungarian immigrants, and his sister Ellen is four years older than he. The family moved to the hamlet of Roosevelt on Long Island in 1955, where Stern developed an interest in radio at five years of age. While Ray was a homemaker and later an inhalation therapist, Ben was a co-owner of Aura Recording, Inc., a recording studio in Manhattan where cartoons and commercials were produced. When he made occasional visits with his father, Stern witnessed actors Wally Cox, Don Adams and Larry Storch voice his favorite cartoon characters, which influenced him to later talk on the air rather than play records. Ben was also an engineer at WHOM, a radio station in Manhattan. On completion of sixth grade, Stern left Washington-Rose Elementary School for Roosevelt Junior-Senior High School. In June 1969, the family moved to nearby Rockville Centre and Stern transferred to South Side High School.

Stern spent the first two of four years at Boston University in the College of Basic Studies. In 1973, he started to work at WTBU, the campus radio station where he spun records, read the news, and hosted interviews. He also hosted a comedy program with three fellow students called The King Schmaltz Bagel Hour. Stern gained admission to the School of Public Communications in 1974 and earned a diploma in July 1975 at the Radio Engineering Institute of Electronics in Fredericksburg, Virginia which allowed him to apply for a first class FCC radio-telephone license. With the license, Stern made his professional debut at WNTN in Newton, Massachusetts, performing airshift, newscasting and production duties between August and December 1975. He graduated magna cum laude from Boston University in May 1976 with a degree in Communications and now funds a scholarship at the university.