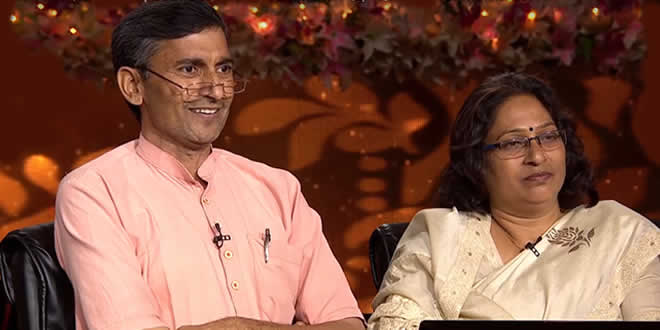 Dr. Madhuri Bhardwaj is an Indian social worker who founded the “Maa Madhuri Brij Varis Sewa Sadan, Apna Ghar” along with her husband, Dr. Brij Mohan Bhardwaj. Today, this home for the homeless has 21 ashrams across India, and it serves more than 4000 people. The couple has dedicated their whole lives to serving the sick and homeless.

Madhuri Bharadwaj was born on 29 June 1973 in a village in the Aligarh District of Uttar Pradesh. After her schooling, she went on to pursue BAMS (Bachelor of Ayurvedic Medicine and Surgery) in Aligarh.

Husband Wife Partnership: A couple who shared their dream

She met her future husband, Dr. Brij Mohan Bhardwaj when she was studying in the 9th standard in Aligarh. At that time, Brij Mohan was studying in a college in Aligarh. Madhuri and Mohan both used to travel on a bus to attend school and college, respectively. In the bus, they would discuss a topic unusual for two teenagers. They would talk about their shared dream; a meaningful life, dedicated to helping those in need. In Madhuri, Mohan found an echo of his own mission. Mohan and Madhuri planned to be partners in this venture. Eight years after their meeting, they decided to become life partners and got married in year 1993. However, they decided to never have their own children; as they wanted to invest their all energy on the sick and homeless. They both became doctors and started bringing the abandoned sick people from the streets into their homes.

Apna Ghar: A roof for the homeless and destitute

The organization began ‘Apna Ghar’. Ashram (a destitute home) with the aim to serve the helpless destitute persons who are facing a very painful phase of life. Along with his spouse and helpmates continue their mission to give homage, hope and happiness to homeless, destitute, oppressed, helpless, abandoned, mentally and psychically sick, injured, infected, old aged and dying condition persons. These persons are generally found on railway station, bus stand, religious and other public places in very unhygienic, critically diseased and painful condition. Nobody comes forward to help or even to touch them. So due to lack of food, medicine and care their condition becomes more and more critical. Then they are going towards lingering and painful death. All of our efforts to reduce their pain save their lives and give them a homely environment food, shelter and medical treatment free of cost. After recovery the organization rehabilitates them by various ways so that they can live a respectful social life as well as they can stand themselves in main stream of the society.

To provide the services with devotion to these persons the organization developing this level set up:

Although most of the ashrams run on public support, ashrams in Kota and Ajmer are partially supported by the Government of Rajasthan. Every ashram displays a board outside of it; mentioning the daily needs of ashrams, and these are more often than not met by visitors donations. The organization often runs crowdfunding campaigns to raise costs.

The noble work of this doctor couple has been acknowledged both by the government and the general public. Many media houses have covered their stories on their respective platforms. On 25 October 2019, Dr. Brij Mohan Bhardwaj and Dr. Madhuri Bhardwaj appeared on a special show called ‘Karamveer’ of the popular Indian game show, Kaun Banega Crorepati (KBC). Click here to see it on YouTube.