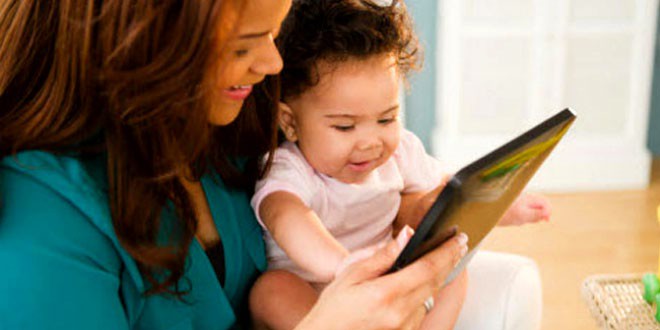 Your toddler is already a tech pro: Study

Babies as young as two-year-olds are adept at using touch screens, and can swipe, unlock and actively search for features on smartphones and tablets, a new study has found.

This level of interactivity is akin to play, the researchers said, suggesting that the technology might have a potential role in childhood developmental assessment.

They base their findings on 82 questionnaires on touch screen access and use, completed by the parents of children aged between 12 months and three years.

Most of the parents (87 percent) gave their child the device to play with for an average of 15 minutes a day, and nearly two-thirds (62 percent) said they had downloaded apps for their child to use.

Nine out of 10 parents who owned a touch screen device said their child was able to swipe.

Half of them said their child was able to unlock the screen, and nearly two-thirds felt their child actively searched for touch screen features.

In 1999 the American Academy of Paediatrics recommended that screen time be discouraged in children under the age of two, on the grounds that it risked exposure to unsuitable material and the displacement of other developmentally important interactions and play.

However, the researchers involved in the study suggest that these recommendations were made before the advent of touch screen media, which might have a different impact on the developing brains of toddlers.

“Interactive touch screen applications offer a level of engagement not previously experienced with other forms of media and are more akin to traditional play,” they wrote.

The findings were published in the journal Archives of Disease in Childhood.

Share
Previous 95% teens aged between 13 and 17 years and 76% minors below age of 13 use YouTube daily
Next What does Islam say about suicide bombing, hijackers, and terrorism in general?