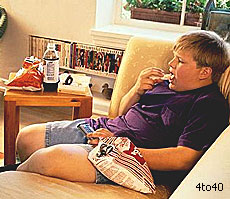 Aditi is barely eight years old. But lately she’s put on more weight than many children her age. It’s a cause of worry to her parents, both of whom were overweight as children. They have cut down on her food intake though it’s rather difficult to get her to follow her new diet. For years of being fed large amounts of food has given her an enormous appetite.

The new diet of low-fat cereal, fruit and greens makes her feel hungry all the time. And she isn’t allowed to nibble tit-bits in-between meals like she used to, either. As a result she is often irritable and simply refuses to go to the gym her parents have enrolled her into a month ago. She prefers to stay at home when she’s not in school, looking for food.

Why is your Child Overweight?

While fat gain can be described as the storage of excess calories, the reasons behind this energy imbalance are complex. Heredity, family and social influences, the child’s tendency to be active or sedentary, and food choices all might play a role. Some geneticists believe that children of overweight parents appear to have a 25 to 40 percent chance of becoming overweight adults. But while heredity or genes may be an important cause, lifestyle patterns such as an excessive fat intake and inactivity play an equally important role.

Appetite is a very important factor, too. The child who has a tremendous appetite that runs to rich foods like potato chips, meats, cheese, cake, cookies and pastry and gulab jamun is certainly going to put on more weight than the child who prefers vegetables, fruit and grain.

Most children who like fatty foods do so because they are offered as rewards for good behaviour or to express their parents’ love for them. They’re overweight as babies and remain overweight through childhood. Parents should establish healthy eating patterns right then when they are babies, as soon as the tendency to becoming overweight is evident.

Unhappiness and depression also sometimes leads to large appetites in children. This can happen to children who are depressed and lonely as this is the period when they are drawing away from their close emotional dependence on their parents. Eating sweet and rich foods serve as a substitute for the lack of close friends in the lives of many of these children. Worries about schoolwork also sometimes make children seek comfort in overeating.

Weight gain is common during puberty. The appetite normally increases to compensate for the increased rate of growth. Or because of changes in the social life of children at this point of time. However, there is one important point that needs to be taken into account. There seems to be a normal tendency for many children, including well-adjusted and successful ones, to put on extra weight in the seven-to-twelve year old period. Few of these children grow up to be excessively overweight. They stay plump during the two years of very rapid puberty development and then slim down as they grow older.

From Fat to Fit

But for those children who really are overweight, making them stick to a diet is not as easy as it sounds. So many adults find it difficult to stick to a diet themselves, so how can one expect a child, who has far less willpower than the adult, to stick to it? Parents can keep their overweight child from temptation by eliminating rich, fatty desserts. Substituting cakes and cookies with fresh fruit in the kitchen for nibbling, is a good way of making a dietary shift without the child feeling it drastically.

When dieting is being considered, it is preferable to consult a doctor who will decide whether it’s even necessary to do so. Weight-loss diets should be mainly based on changing the type of food children eat, rather than focusing on the amount of food.

If the family substitutes oily fried foods and rich dairy products with low-fat plant based foods like beans, vegetables, rice dishes and whole-grain chapatis, weight loss occurs without anyone going hungry or forcing your child to go hungry.

Then there’s exercise. It is a fact that regular physical activity makes children healthier. Exercise builds strong muscles, which promotes good posture and strong bones, and burns calories. This in turn reduces body fat and improves both self-confidence and body image. Active children who become active lean adults also have less risk of diabetes, hypertension, cardiovascular disease, and some cancers.

Some type of vigorous activity such as swimming, biking, in-line skating, or running, three to five times a week, does a lot of good for children.

And finally, be positive. Keep family time active and enjoyable. Show your child that you love her. It would keep her from turning to her favourite food for comfort.

Share
Previous The Making of Father
Next The Period of Pregnancy