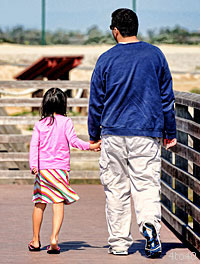 A green hedge encrusted with white mountain roses – the smell I carry in my nostrils to this day. Pure and heady. I was three.

It’s a snapshot of memory. I put a name to the memory much later. Lansdowne, a quiet and picturesque cantonment town set in the hills of Uttar Pradesh. My father had arranged the trip.

He resides in those snapshots of memory which have managed to capture vibrant moments in the wisps of time. Moments of sights and smells in single frame – no more.

Like the smell of roasted coffee seeds, which introduced my milk teeth senses to the pleasures of constant expansiveness, and the sight of free buffalo milk being squeezed out of heavy udders by Bhola, the one-eyed Gujar, in an urban village near our house, in Delhi.

And yes, I see a pair of trouser legs beside which I walk to Bhola’s corner every other morning. The face? Not visible. It remains a blur.

Sometimes I think I can picture his voice. Slightly high-pitched. But it fades when I exhale.

And sometimes I can feel his touch. Seated in an ‘easy chair’ with long leg-rests, that proclaims his origin from Kerala, his hands rest lightly on my head as he reads. A gesture of affection…

Now I see him, his face. Wide set eyes, kind eyes. A white khadi shirt, starched, loose trousers turned upward, a leather case and a slow tread. I am 5. He has turned 50.

Baji – I call him that because that’s what everyone calls him. It is a distortion of the word ‘Babuji’ as he was addressed by an army of hangers on who benefited from his good heart and kindliness in the 17 years that he lived in Kanpur, before we shifted to Delhi, when I was three months old. He was a scientist.

He died when I was nine. There are very few memories, for each one of us was hesitant to talk about him for fear of causing pain. The childhood mind too has a logic all its own and often erases memory as a timely tactic. The effects are longlasting though.

Shards of statements uttered by members of the family, much later in life, helped to create some sort of an image of my father for me. A visit to Madras (now Chennai) in the 80s elicited the remark that his name adorns the roll of honour in Presidency College where he studied up to post graduation. He had a razor sharp mind. But I am unable to find a measure for it.

A chance discovery of some books by Leo Tolstoy, Ivan Turgenev and on microbiology, in Russian, brought forth the comment that he was an atheist, perhaps a leftist? One who was extra careful not to hurt the feelings of colleagues junior to him, but was not excessively awed by authority. And had sudden flashes of temper that cooled soon enough.

Once, stacks of books gave way to a couple of manuscripts typed neatly and in double space, with white ink hiding errors. So he liked to write and indeed, had some articles published in magazines as well. That is something I relate to. Maybe I got my journalistic instinct partly from there.

I made the most momentous discovery when I was getting married, at the age of 25, in 1988. My mother showed me the gold medal my father had received for topping (first class first) Madras University and said she was getting it melted to make the taali’ (mangalsutra). That way I would be permanently connected to him, she said.

I have been married for 13 years now and I have a confession to make. I don’t wear the taali everyday, only on ritual occasions. But though separated in time and largely unknowing of each other, I think my father and I are friends. It would have been eventful knowing him though…