Production of Milk And How It Reaches The Baby 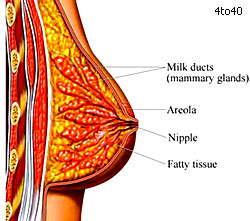 Milk production in the breast depends on the prolactin hormone secreted by the pituitary gland present in the brain. The pituitary gland releases prolactin when it receives sensory messages from the breast nerves that have been stimulated by the baby’s suckling. This hormone passes through the mother’s bloodstream to the breast epithelial cells to produce milk. Thus, the more frequent, vigorous and effective the baby’s suckling, the more is the amount of prolactin secreted and the more milk produced. The milk production is primarily regulated by the baby’s demand.

The milk ejection reflex, or the sensation that milk is on the verge coming down, works under the influence of a hormone called oxytocin, which is secreted by the pituitary gland in response to the suckling stimulus. Oxytocin reaches the mother’s breast through the blood stream and causes the contraction of the smooth muscle cells in the breast, which eject the milk through the nipple.

The production of oxytocin is not entirely dependent on the suckling stimulus. Some amount of oxytocin is also secreted by the stimulation of other sensory pathways, like seeing touching or feeling.

On the other hand, a mother’s lack of confidence in her ability to breast feed, stress or embarrassment could interfere with this reflex. Thus, the most common cause for the failure of the ejection reflex is psychological inhibition.

How does the baby get his milk?