Nausea Attacks In The First Trimester 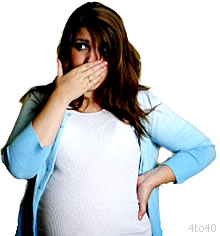 The heroine runs out of the room with her hand on her mouth. Her parents look thunderstruck. And then it hits them. Their daughter is pregnant. Thanks to Hindi movies, few aspects of pregnancy are as well known as morning sickness.

The term morning sickness is actually a misnomer since it can strike at any time and last all day. And it includes a range of symptoms, from heartburn to nausea and occasional vomiting to extreme vomiting (“hyperemesis”).

Dealing with the dreaded morning sickness can be easy if you know what causes it. Then you can take action to reduce its impact on you. The best way to handle it is to learn the tricks that will work best for you. All you need is time and patience and a belief that it will subside even in a worst possible case, after nine months.

Morning sickness is caused by the upheaval that pregnancy causes in the woman’s body. Pregnancy hormones are activated by that part of the brain which also controls the senses. And as the hormones get activated, the sense of taste and smell also go haywire.

How Long Does It Last?

Symptoms can appear as early as the fifth week of pregnancy and can last until the twelfth or thirteenth week, or sometimes, till the end. The severity and duration varies from woman to woman. Fortunately though, nausea related to pregnancy is self-limiting. It is usually a problem only during the first trimester.

Do not worry about it unless you are vomiting too much. You might be at the risk of getting dehydrated. And if your vomiting extends well into the second trimester and if you are unable to hold food down at all or if you are losing weight you could have a problem on your hands. These symptoms are diagnosed as a medical condition called hyperemesis gravidarum, where in a woman cannot tolerate food or liquids at all. In this condition, you may have to be administered fluids intravenously to avoid severe dehydration that can ultimately affect the kidneys and cause electrolyte abnormalities.