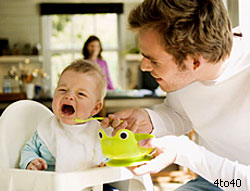 Lolita’s son is three years old. He is very fussy about his food and spits it out if he is forced to eat. Lolita introduced her son to chewy food only when he was 15 months old, much after he cut his first teeth. She often wonders if there is a connection between delayed weaning and her son’s food habits.

According to a report in BBC news recently this could be true. Scientists from the Bristol University say that delaying the introduction of solid foods could make children much more choosy about the foods they eat later. The report says that babies should be introduced to a varied diet between the ages of six to nine months to help them develop varied tastes and to prevent them from becoming fussy eaters.

Pauline Emmett, senior nutritionist at Bristol University, headed a research group which monitored food habits of more than 10,000 infants in British families. They found most of the children were introduced to lumpy food by the age of six months. But 20 percent of the children were not introduced to solid food until they were 10 months and this group went on to eat less varied food later.