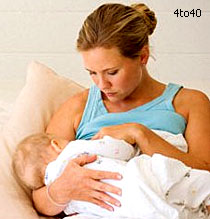 I went to meet Ria the next day after her delivery. She and her baby glowed in the soft light of the sun that was peeping in from the windows. Together, we admired the little bundle that was Ria’s daughter. Ria’s had been a normal delivery. I complimented her on how well she looked after it.

But, Ria looked somewhat worried. “I’ve been secreting all this funny stuff,” Ria murmured half to herself. “Do you know that there’s this yucky, yellow stuff that’s been coming out.”

“I threw it away, of course. It stank on top of everything.”

The ‘stuff’ that Ria threw away was colostrum, or early milk. A yellowish coloured thick liquid secreted soon after delivery for about 72 hours, colostrum is said to be nature’s best gift for the new born.

The new born does not have sufficient innate defenses to protect himself against the contaminated environment he enters from the usually sterile environment of the womb. Colostrum is all that he needs to adapt to the new environment.

Actually it is the strange colour and thick consistency which makes it useful for the child. It protects forms a protective coating over the baby’s gastro-intestinal tract and protects it from infections. It also protects the child against bacteria and viruses that the baby must have come in contact with in the birth canal and during his association with other human beings after birth.

Through colostrum, the mother transmits the antibodies that the child needs to fight against viral, bacterial and fungal infections. This is called the ‘homing mechanism.’ Besides, colostrum also imparts immunity to the child against various respiratory and allergic conditions.

Colostrum is high in protein and low in fat. Its consistency depends on the needs and reserves of the child after birth.

It has been observed that the sucking reflex of a new born is at its height twenty to thirty minutes after birth. If the infant is not fed, the reflex diminishes rapidly to reappear adequately 40 hours later.

Early breast feeding also has a physiological effect on the uterus. The suckling of the baby starts the mechanism that helps the uterus to contract and come back to its normal shape.

Besides, nursing soon after delivery has a laxative effect on the meconium, or the black stool that the baby releases in the first two to three days. Meconium is basically the amniotic fluid that has gone into the baby’s stomach while it was inside the womb.

This high protein diet is not only useful for the baby. Colostrum feeding is also useful to the mother. It helps stop the bleeding after delivery and helps the mother regain her normal figure.