Breastfeeding Helped Me To Tone My Body: Lara Dutta 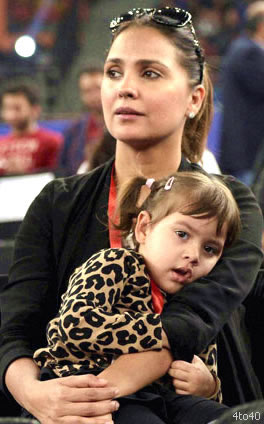 Actress Lara Dutta, who recently gave birth to a baby girl with husband Mahesh Bhupathi, today said that breast feeding has helped her to tone up her body after seven months of motherhood.

The 34-year-old former Miss Universe became a proud mother of Saira on Jan 20 and is all set to be back on silver screen with director Bejoy Nambiar’s David.

“After seven months of motherhood, apart from exercising and dieting, breastfeeding helped me to tone my body up to get back to acting,” Lara told reporters after inaugurating a poster exhibition on ‘Goodness of Breastfeeding’ at a private hospital here.

“Being a mother is the most beautiful aspect of a woman’s life. It is also a great responsibility. As a mother I want to help all new and expectant mothers understand the importance of breastfeeding,” she added.

Lara said that she has started shooting for gangster-comedy David.

“David is going to be my first comeback film,” she said.

Lara said she is also working in one of the films being produced under her banner Bheegi Basanti Video.

“I am quite busy. There are lots of things on the plate,” she said.

However, Lara said she will be too choosy with her projects now as she wants to spend more time with the tot.

“She (Saira) is the best bridge to choose work for myself because it is all about choosing quality films or projects. There is very little time to spend away from her. If the film is really worth it I am going to take it up,” she said.

Lara added that Saira is a wonderful baby and is best thing to happen in her life.