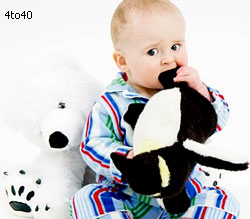 I was planning to stop feeding when my son started cutting his teeth. Mainly because I used to have nightmares of running frantically to a doctor to stitch a bitten nipple back into place. Or even resigning myself to a nipple-less existence for the rest of my life.

Until it happened. It was not as bad as I had imagined it to be, but, it hurt. In reaction, I did what I was not supposed to do – I shrieked. After the initial shock passed, reason prevailed and I pushed in a finger into the suckling, err biting mouth, to cut suction as the advice-for-mama books had said.

I am still scared of a repeat performance and have been battling bite-fears, which keep coming back. Nonetheless, I feel I should continue feeding for some more time, at least till my son is a year old. The sturdiness it will give him, is not the only reason I want to continue breastfeeding my child. It’s also the convenience. The ease with which I can put him to sleep is too hard to give up.

Ironically, the same tiny teeth that generate so much fear, were welcomed into the world with a lot of fanfare. We had, in fact, celebrated their entry into our lives.

I have often wondered how mothers manage to feed after their children get their milk teeth. A friend says he was feeding, or rather suckling, till he was three. By then, he must have had a set of 20 – with a frightening potential of making mincemeat of the poor milk provider.

But, obviously that did not happen. I met his mother recently, and she certainly does not look like she has a nipple-less existence.

Apparently, biting is fairly common among babies. For them, it is a mode of exploration. They like feeling and ‘mouthing’ things, and often, they cannot make out the difference between gnawing on a toy and biting a person.

When children teeth, their swollen gums get quite uncomfortable and chewing on something brings relief. So, if a nipple comes in-between the teeth when the child is feeling particularly itchy, god bless her and may her milk facilitator rest in peace!

What one could do is keep a teether at hand to offer him. According to Penelope Leach, the author of Your Baby and Child (the mother of all mama books) one should try to tell the baby very firmly that biting is not acceptable. Make sure you don’t jerk away with a shriek, she adds. It could trigger two reactions. Either, it will scare the kid, and you will have to coax him back to the breast (which does not sound like a bad idea at all), or he may think this is some game and will do it again to get the same reaction from you.

Laughing at the act or biting the child back can be potentially dangerous, warns Leach. It would send the message that biting is acceptable.

For many children, biting is also a mode of communication. They use it to get attention. So, keep aside your phone calls or reading for later and try to maintain eye contact when you are feeding, she says. I tried that last week. I talked to him while I was feeding, but still got bitten!

When some friends, with kids of their own, first got to know that I was going to be a mom, they rather knowingly asked, “Haven’t you bitten off more than you can chew?” A little late in the day perhaps, but I kind of get their meaning now.