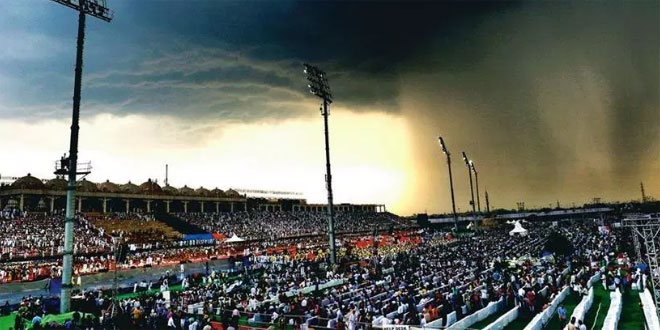 Thousands of followers of Sri Sri Ravi Shankar had their lessons in art of living amid thundering showers at Yamuna flood plains here on 12th March, 2016.

Musical groups and dance troupes from countries like Ghana, Indonesia, Sri Lanka, South Africa, and the Netherlands performed before a huge gathering on a windy evening.

Tribal dances were also a big attraction with groups from Chhattisgarh and Rajasthan, as well as Sri Lanka and South Africa a treat to watch. Classical and folk dances including Bharatnatyam and Bhangra choreographed by renown professionals also enthralled the audience.

Bringing a better use of technology, the organisers managed to webcast the event to more than 161 countries.

However, parking and traffic remained a concern for the second consecutive day. As the dusty Yamuna floodplain turned to slush, it made walking virtually impossible and vehicles got stuck.

Share
Previous Holi Blues
Next Skin and hair care before, after Holi