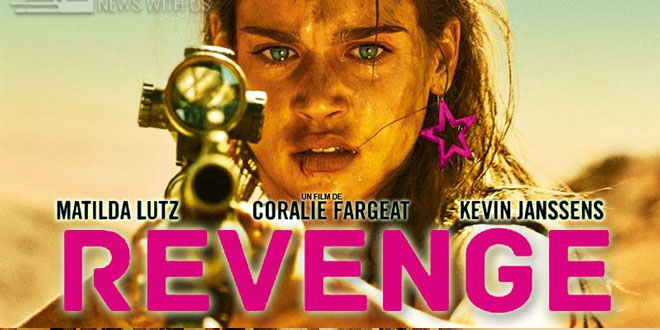 Never take your mistress on an annual guys’ getaway, especially one devoted to hunting – a violent lesson for three wealthy married men.

Revenge is a 2017 French rape and revenge action horror film directed and written by Coralie Fargeat. Starring Matilda Lutz, Kevin Janssens, Vincent Colombe and Guillaume Bouchède, it follows a young woman who is assaulted and left for dead in the desert.

Jen is an American socialite who is in a secret relationship with French millionaire Richard. The two fly out to Richard’s secluded home in the middle of the desert for a weekend together before his annual hunting trip with friends Stan and Dimitri; Richard’s helicopter pilot gives him some peyote as a gift. However, Stan and Dimitri arrive a day early, disappointing Richard, who was hoping to keep Jen a secret. While the three men and Jen have a fun night of drinking and dancing, Jen hides the peyote in her necklace for Richard.

The next morning, while Richard is away, Stan tries to get Jen to have sex with him, claiming she had come on to him the night before. When she refuses, he rapes her while Dimitri actively ignores them. Richard returns, berates Stan, and offers Jen a large sum of money to forget about the incident. When Richard refuses to send Jen home, she runs off into the desert while the three men give chase, ending at a dead-end cliff. Richard pretends to call his pilot to take Jen home, then pushes her off a cliff, where she is impaled on a tree during the fall. She falls unconscious and is left for dead by the three men, who promise to continue their hunting trip as if nothing had happened.

Jen wakes up and uses her lighter to set the tree she is impaled on fire, causing it to break and allowing her to make her escape with a branch still stuck through her body. She wanders through the desert, trying to avoid the three men, who have since realized that she’s escaped and have split up to search. Jen encounters Dimitri urinating in a river and attempts to shoot him with his own shotgun, but it is not loaded. Dimitri tries to drown Jen, but she takes his hunting knife and stabs him in both eyes. He bleeds out in the river, as Jen takes the knife, gun, and Dimitri’s supplies.

Jen hides in a cave and uses the peyote to numb herself before removing the branch and cauterizing the wound with an aluminum beer can, branding herself with the beer’s phoenix logo. After a series of nightmares of the men hunting her, Jen sets out to hunt them down first. After the remaining men discover and dispose of Dimitri’s body, Richard orders Stan to track Jen down in his SUV. Stan runs out of gas while in Jen’s sights, and Jen shoots him in the shoulder while he attempts to refill the tank. Jen and Stan engage in a gunfight, in which Stan blows Jen’s earlobe off with a rifle and Jen tricks Stan into stepping on a large piece of broken glass. After removing the glass from his foot, Stan tries to run Jen down with the SUV. However, Jen kills him with Dimitri’s shotgun and takes the car.

Richard returns to the house, calls the helicopter, and takes a shower, but hears a noise and searches the property for Jen. She finds him once he’s given up and shoots him in the stomach, and the two chase each other around the house with shotguns. Richard knocks Jen out with his shotgun and tries to strangle her, but she shoves her hand in his stomach wound, forcing him to drop her. Jen recovers her shotgun and shoots Richard in the chest, killing him. A bloodied but triumphant Jen walks out of the house and turns around as she hears the helicopter approach.

Scrolling through Twitter last week, one tweet stuck out from the usual unhealthy mix of hate-mongering and racism. It was clear, after letting it simmer for a couple of seconds, that it was indeed the Tweet of the Day.

Replying to a post by Teen Vogue plugging a gloriously inept article titled ‘How to get your best summer vagina’ one genius lamented, “I’m going to have to have a suboptimal vagina this summer as I’m concentrating on getting the perfect winter anus.”

Apologies for being this graphic this early, but I promise you there’s a point to this. Also, if you’ve read some of the horror stories about the film we’re about to discuss, you’d agree that it’s sort of fitting that we’re starting off in this manner.

Anyway, the tweet. Profanity by itself — devoid of any subtext, layers or wit — is utterly pointless, regardless of whether it is a man or a woman using it. We saw this in the recent film, Veere Di Wedding, in which several characters’ lines were punctuated with random, jarring cussing. Sure, in a country like ours, where only a year ago, a similar female ensemble film, Lipstick Under My Burkha, was butchered for simply showing women being women, not censoring cursing is some sort of progress. But don’t mistake shock value for good writing.

Which is why I bring up that brilliant tweet. In one lacerating sentence, the writer exposed the ridiculousness of what Teen Vogue was presenting. It gave the illusion of profanity without ever using any. And that’s what makes it funny, and in a weird way, extremely feminist.

Similarly, simply hiring a woman in the lead role and handing her a gun does not qualify an action movie as feminist. Having a female character kill people — or use the F-word — isn’t being particularly progressive. Men do that all the time in movies, and it’s hardly the sort of behaviour to emulate.

And that is why Revenge, despite its disarmingly unimaginative title, is the action movie equivalent of that wonderful tweet — bitingly intelligent, unapologetically subversive and a true example of 21st century feminist cinema.

But subversion isn’t easily achieved. By definition, to be subversive, certain rules must be broken. The challenge lies in convincing the viewer that they’re watching one kind of movie, and then to pull the rug from under their feet. So if the opening couple of scenes in Revenge remind you of a Michael Bay film — lurid oversaturated colours, gross sexualisation of female bodies, shot with a hungry camera — don’t be surprised.

We see Jen, our heroine (played by Matilda Lutz), as she prances around in short shorts and crop tops, sucking suggestively on a lollipop. Her boyfriend, Richard, a square-jawed yuppie cheating on his wife, has brought Jen to his secluded desert home, thirsty for some time alone. But their getaway is rudely interrupted by his two friends, who arrive early for the hunting trip they’d planned.

Soon enough, a hunt will be conducted, but not in the manner that any of the characters had anticipated. After a night of heavy drinking and partying, Jen dances with Stan, the most disgustingly grotesque of Richard’s two friends. Stan, using the same logic that we’ve heard some of our own ministers spout, sees Jen’s openness as an invitation. The next morning, when Richard is away on an errand, he rapes her.

At first, Richard is aghast at what has happened. But immediately, it is clear that he isn’t as reliable as he looks. He begins scolding Stan, and Dimitri, the third friend who had looked the other way when he heard Jen’s screams — almost as a mother would when her toddler breaks an expensive vase while her back is turned. He decides that letting Jen return to the city could create certain difficulties for him, an important businessman. So along with the two monsters, he drags her to a cliff and pushes her over the edge.

They watch as Jen is impaled by a dead tree stump, and convinced that no one could survive the fall, they return. But Jen does indeed survive, and in one of the most skin-crawlingly uncomfortable sequences you’ll see this year, she pries herself off the stump, and crawls into the safety of a cave, where she performs graphic surgery upon herself and emerges, very literally, like a phoenix. And then she hunts them down, the men who violated her, by penetrating them — with bullets and knives and sheer brute force.

First-time feature director Coralie Fargeat knows what she’s doing, and to make her point, she must lure you in. Like a magician, she must distract you, and when she has your attention where she wants it, that’s when she makes her revelation. This 180-degree switch in style is aided by a blindsiding pivot in perspective — the film begins as a sick representation of the male gaze — Jen is very much an object in those early scenes, just waiting to be devoured, but towards the end, transforms into a look at the world through female eyes — constantly on the edge, burning with anger and always the underdog.

What Fargeat has achieved in Revenge is similar to what Julia Ducournau did last year with her feminist cannibal film, Raw. Both directors used the language of horror cinema to convey ideas specific to women, by combining French arthouse storytelling with American exploitation.

They’d make for a rough double bill, but these are films designed for seasoned horror fans, not casual passers-by. Revenge is available on Netflix.

Previous समझो प्रकृति का महत्व: विश्व पर्यावरण दिवस
Next Is blood the only fluid circulating in the body?