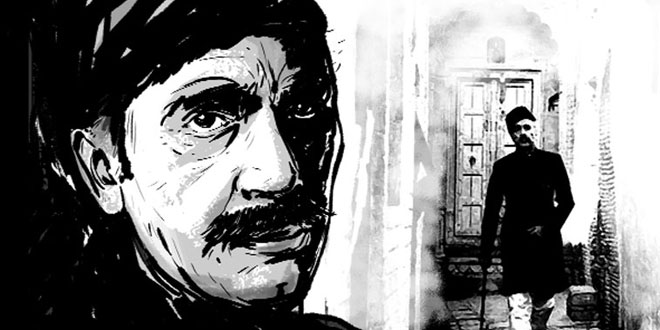 This year marks the 103rd birth anniversary of the much-respected artist Balraj Sahni. It also happens to be his 43rd death anniversary. One of the icons of Punjabi intellectual world, his dignified presence on the silver screen lent a high measure of respectability to the films he was associated with. Here is a recap of the life and work of the artist and his contribution to the world of literature and cinema.

BALRAJ Sahni has remained a ghostly figure in the history of Indian cinema. This is because he was for most of the time away from the gossip circuit. He hardly gave any personalized interviews and there was no publicist who promoted him to producers. He found work from those who belonged to the theatre movement in the country and from friends who respected his talent.

He is remembered best today for his last film, Garam Hawa. But his innings in cinema have been long and meritorious. Balraj was not his original name. His parents named him Yudhishthir and the name remained until he went to school. His ancestral home was in Amritsar, where he spent his early years with his brother Bhisham, and his sister. Balraj was a studious child and studied long for his first postgraduate degree in English from the Panjab University, Lahore. He followed this with a graduation course in Hindi and moved up to get another postgraduate degree in Hindi. In 1936 the “over educated” Balraj married Damyanti, and moved to Shantiniketan to work as a teacher in both English and Hindi.

In 1938, Balraj was noticed by Mahatma Gandhi who asked him to join his secretariat. In 1939, Gandhiji recommended him for a job in the BBC in London in the Hindi language broadcast section. He sailed from Bombay and joined his new duties just before things became less certain in Europe and England. When War broke out in 1939, Balraj was telling his Indian listeners in India on the rise of Hitler in Germany and his campaigns.

It was while he was a staff broadcaster in BBC, that he was joined by another woman broadcaster, the daughter of wealthy parents and a bohemian. She had moved out of her parents’ home early in life to roam the world becoming a failed actress, a better pamphleteer and a well-respected film editor. That was Marie Seton. Within BBC, the erudite Balraj caught Marie’s attention, and she invited him to meet her friends. The only thing that interested Balraj was her film connection, and Marie obliged. She introduced to Balraj Sahni the world of Soviet Cinema and the works of the film maker S. Eisenstein. There was also more European cinema, which Balraj saw. The more he saw the cinema of cause, Balraj was hooked in his search to study the works of Marx and Engels. Between 1941 and 1943, he was transformed into a committed communist worker and returned to India in the end of 1943. He joined the Indian People Theatre Association (IPTA) as a regular worker and a card holder of the CPI.