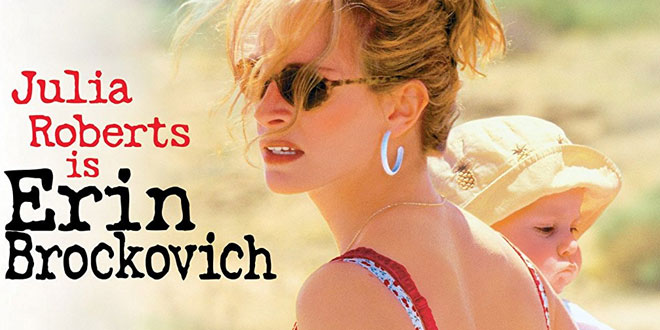 Erin Brockovich is a movie starring Julia Roberts, Albert Finny, Aaron Eckhart and Peter Coyote. Directed by Steven Soderbergh, the movie was released in 2000. Erin Brockovich is the story of a single mother, who fights against the injustice meted out to the common people. Read on to know the full summary of the movie Erin Brockovich…

Erin Brockovich (Julia Roberts) is a twice-divorced mother of three young children. She has had only basic education and cannot find a job. On top of that, her lawyer fails to get her compensation in a lawsuit against the guy who hit her in an accident. With no job and no money to support her family, she turns up at the door of her attorney Ed Masry (Albert Finney) to hire her in his law firm. Even though hesitant, he agrees to employ her in the clerical department of his firm because of her constant persistence.

One day, while working in the office, she stumbles upon a file related to real estate deals and prevalence of some strange diseases in Hinkley, a small town of California. She goes to Hinkley to verify the incident and when she gets confirmation about the same, she starts to question the people involved. It turns out that the town is getting used as a dumping ground for hazardous industrial wastes, resulting in the contamination of the ground water. She enlists the support of the local community and files a suit against the people involved.

Helping her throughout is George (Aaron Eckhart), her neighbor. A Harley Davidson biker, he takes care of her kids in her absence, cares for her and finally, wins her love. Erin and Ed, with the help of a major law firm, fight the case and in the end, win a compensation of $333 million, the largest settlement ever paid in a direct-action lawsuit in U.S.