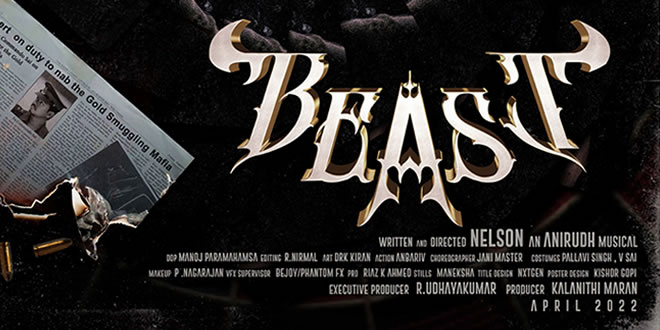 The production rights of Vijay’s 65th film as lead actor, which was tentatively titled Thalapathy 65, were acquired by Sun Pictures in early January 2020, and the film was set to be written and directed by AR Murugadoss. However, the producers ousted Murugadoss from the film in October 2020, after he refused to cut his renumeration. Nelson was later hired, and wrote a new script for the film.

With an official announcement during December 2020, the film was launched during March 2021 and principal photography began the following month. Irrespective of shooting being interrupted due to the second wave of COVID-19 and the lockdown in Tamil Nadu, filming resumed during July 2021 and ended that December. It was shot across various locations in Chennai, including a specially designed set resembling that of a shopping mall where most of the film was shot, whilst sporadic schedules took place in Delhi and Georgia. The music was composed by Anirudh Ravichander, whilst cinematography was handled by Manoj Paramahamsa, editing by R. Nirmal and production design supervised by D. R. K. Kiran, respectively.

Beast is scheduled for theatrical release on 14 April 2022, on the occasion of Puthandu.

The music is composed by Anirudh Ravichander in his third collaboration with Vijay and Nelson. For the music sessions, Anirudh saw the shooting of the film in Chennai in mid-July 2021; he said that he could easily work on the compositions, instead of approaching the actor and director for narrating a particular sequence, so that he could get an idea of how the song for that scene could be materialized. In August 2021, it was reported that Sivakarthikeyan would contribute to the soundtrack as the lyricist for one song. By early-November 2021, it was reported that Anirudh had completed composing all the songs for the album.

Beast is scheduled for theatrical release on 14 April 2022, on the occasion of Puthandu. The film will have dubbed versions in Hindi, Telugu, Malayalam and Kannada languages.

The most exciting factor about Beast when it was originally announced was the coming together of filmmaker Nelson and Vijay for the first time. After leaving a strong mark with his uniquely entertaining films such as Kolamavu Kokila and Doctor, Nelson takes a quantum leap to attempt something highly ambitious with Vijay, who is inarguably one of the biggest stars in the country. Beast, a Die Hard inspired invasion thriller, is Nelson’s attempt at going big in terms of vision and scale which is only let down by lethargic writing.

The film opens somewhere near Kashmir where Veeraraghavan (Vijay), a R&AW officer has been prepping for a mission for three months. At the last minute, the Indian government decides to call off the mission, but Veera decides to go ahead as per the original plan, against the orders of his own bosses. He manages to successfully execute the mission, but the outcome leaves him psychologically scarred, forcing him to quit service and return home for good. A few months later, he finds himself in the midst of a hostage situation. He is trapped in a mall with his girlfriend as terrorists demand their leader (who was originally captured by Veera) to be released.

Nelson rose to fame with his terrific use of dark comedy in his first two films. His treatment of humour worked wonders in his movies and it even went on to define his style as a filmmaker. Unfortunately, his brand of comedy is barely present in Beast, which works more as a star vehicle aimed only to elevate Vijay’s star image. This attempt is justified with the film’s well-choreographed action sequences and exquisite visuals, but the absence of Nelson’s brand of comedy is a major dampener. Beast is still worth your time but it isn’t as wholesomely entertaining as Nelson’s earlier films. It is somewhat held together by Vijay, whose one-man show is thoroughly entertaining but isn’t enough to salvage an underwhelming film.

In bits and pieces, Beast lives up to all the pre-release hype. The action sequences, which were highly talked about much before release, stand out and Vijay kills it with his charisma in these scenes. This is Vijay’s most stylish film but it’s also one where the style supersedes substance so much that you can’t enjoy it after a point. If only the stylish treatment was strongly complemented by good writing, especially a stronger antagonist, the film wouldn’t have disappointed at places. As much as Nelson tries to stick to his storytelling template by introducing characters who aid the hero in the rescue mission just like in his last film Doctor; these aren’t as funny and memorable as they were in that film.