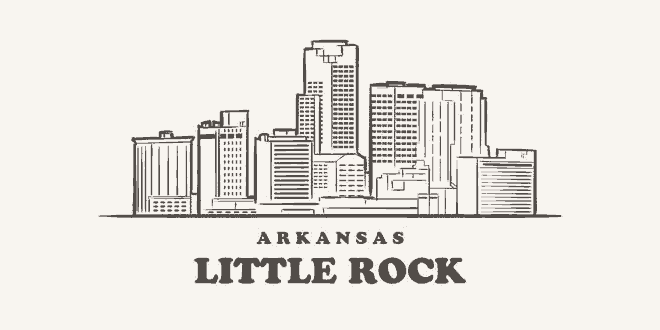 Arkansas, one of the Southern states of the United States, is bordered by Missouri on the north and northeast, by Tennessee and Mississippi on the east, by Louisiana on the south, and by Texas and Oklahoma on the west. The region of Arkansas was first visited by Europeans in 1541-42, when Hernando DE SOTO, a Spanish explorer, led a party through the area. The region was acquired by the United States in 1803 as part of the LOUISIANA PURCHASE, and Arkansas became the 25th U.S. state in 1836.

Long an agricultural region, the state industrialized rapidly after 1940. Today, various service industries account for about two-thirds of the gross state product. The name Arkansas is derived from a Quapaw Indian word meaning “downstream people”; the name was formerly also spelled Arkansa and Arkansaw.

Arkansas encompasses a picturesque region, with much forestland and several major rivers. The highest point is Magazine Mountain (839 m/2,753 ft high), in the western part of the state, and the lowest point, along the Ouachita River in the south, has an elevation of 17 m (55 ft); the approximate mean elevation is 198 m (650 ft). About 7% of the state’s land area is owned by the federal government.

Arkansas comprises two major regions of roughly equal size–the Interior Highlands of much of the west and north and the Lowlands of the south and east.

The Interior Highlands comprise the Ozark Plateau (see OZARK MOUNTAINS) in the north and the Ouachita Mountains. Both areas extend into neighboring states. The Ozarks, ranging in elevation in Arkansas from 150 to 786 m (492 to 2,579 ft), comprise mainly the Springfield and Salem plateaus, in the north, and the Boston Mountains, in the south. The plateaus are gently rolling, except where swift-flowing streams have cut deep valleys. Much of this area is forested and also has good farmland, especially on the Springfield Plateau. The wooded Boston Mountains generally have steep slopes and are interlaced by numerous river gorges.

The Ouachita Mountains comprise a series of parallel east-west valleys and ridges, composed of strongly folded and faulted sedimentary rocks. Included in the Ouachitas is the Arkansas Valley, through which runs the Arkansas River. Although generally less elevated than the rest of the region, the valley contains several lofty points, including Magazine Mountain, which is the highest point in the state, and Petit Jean Mountain. The Ouachita Mountains region as a whole contains many mineral springs, such as those found at HOT SPRINGS in Garland County.

The Lowlands region is composed of the West Gulf Coastal Plain, in the south, and the Mississippi Alluvial Plain, in the east; the terrain is mostly level and from 30 to 90 m (98 to 295 ft) in elevation. The coastal plain has extensive pine forests and important deposits of bauxite, petroleum, and natural gas; the soil is generally sandy. The alluvial plain, adjacent to the Mississippi River, has a deep fill of unconsolidated river-deposited sediments, sometimes with a shallow hardpan that permits irrigated rice farming. Crowleys Ridge, a narrow north-south band of hills covered with loess, is in the center of the alluvial plain.

Arkansas contains several major rivers. The MISSISSIPPI RIVER forms most of the state’s eastern boundary, and the ARKANSAS RIVER flows diagonally across the state from the Oklahoma southeast. Other rivers include the White River, which traverses much of northern and eastern Arkansas before entering the Mississippi; the Ouachita River, which rises in western Arkansas and flows south into Louisiana; and the Red River, which forms part of the boundary with Texas. All of Arkansas lies within the Mississippi River drainage basin.

Arkansas has few big natural lakes; the largest is Lake Chicot, in the southeast, an oxbow lake near the Mississippi River. The state has several major artificial lakes, created by dams on rivers: Lakes Ouachita, Hamilton, and Catherine, on the Ouachita River; Millwood Lake, on the Little River; Nimrod Lake, on the Fourche La Fave River; Ozark Reservoir and Dardanelle Lake, on the Arkansas River; Greers Ferry Lake, on the Little Red River; Beaver and Bull Shoals lakes, on the White River; and Norfolk Lake, on Bryant Creek.

The climate of Arkansas is mild, with warm to hot summers and cool winters. Annual precipitation averages from 1,016 to 1,524 mm (40 to 60 in) and comes mostly during winter and spring. December and January are usually the wettest months in the south, and March through May is the wet period in the north. The Interior Highlands are somewhat cooler than the Lowlands and receive small amounts of snow in the winter. Tornadoes occur in the warm seasons, especially in the extreme northwest and in the low-lying southeast. LITTLE ROCK, in the center of the state, has a mean January temperature of 4 deg C (40 deg F) and a mean July temperature of 27 deg C (81 deg F); it receives 1,232 mm (48.5 in) of precipitation per year. The growing season ranges from about 175 days, in the highlands, to about 240 days, in the lowlands.

About 68,745 sq km (26,543 sq mi) of Arkansas, or about 50% of the state’s land area, is covered with forestland, most of which is privately owned. The state has three national forests. Approximately two-thirds of the forests comprise hardwoods, such as oak, white ash, cypress, elm, and hickory; these are located mainly in the Interior Highlands and in the Mississippi Alluvial Plain. The West Gulf Coastal Plain contains softwood forests, chiefly composed of loblolly pine and shortleaf pine. Tulip trees grow on Crowleys Ridge. The state has many kinds of wildflowers, including American bellflowers, yellow jasmines, orchids, water lilies, and hydrangea.

Among the places of historical interest in Arkansas are Arkansas Post National Memorial, including the site of the first permanent white settlement (founded 1686) in the lower Mississippi Valley; Fort Smith National Historic Site, encompassing one of the first U.S. military posts in the Louisiana Territory; Pea Ridge National Military Park, taking in the battlefield where Union forces scored an important victory (Mar. 7-8, 1862) during the Civil War; and the capitol, in Little Rock, of the old Arkansaw Territory.

Arkansas has a large tourist industry, and each year about 15 million persons visit the state. Notable attractions include Hot Springs National Park, with 47 hot springs used by people seeking relief from illness or injury; Buffalo National River, an unpolluted stream that flows past multicolored bluffs and many caves and springs; and a variety of state parks and recreation areas. Arkansas’ many lakes, rivers, and streams and wilderness areas attract sizable numbers of out-of-state sport fishermen and hunters.

Among the earliest inhabitants of present-day Arkansas were the Bluff Dweller Indians, who probably lived in the northwestern part of the state before 1000 BC. About 2,000 years later, Indians known as MOUND BUILDERS settled along the Mississippi River in Arkansas. When the first Europeans arrived, in the mid-16th century, the Siouan-speaking QUAPAW lived near the mouth of the Arkansas River, and the OSAGE lived to the north of the river; the CADDO Indians, an agricultural people, who constructed distinctive beehive-shaped dwellings, lived in the southwest.

The first Europeans to enter Arkansas were members of a party led by the Spanish explorer Hernando de Soto; they traversed the central and southern parts of the state in 1541-42. In 1673 a group under Jacques MARQUETTE and Louis JOLLIET traveled down the Mississippi as far as the Arkansas River. In 1682 a party headed by Robert Cavelier, sieur de LA SALLE, journeyed down the Mississippi to its mouth. La Salle claimed the Mississippi Valley, including modern Arkansas, for Louis XIV of France and called it Louisiana. One of La Salle’s aides, Henri de TONTY, established (1686) Aux Ares, the first permanent white settlement in Arkansas, near the mouth of the Arkansas River; the community later became known as Arkansas Post. In 1719-20 a colony of Germans was established nearby as part of the abortive French MISSISSIPPI SCHEME. In 1762 France ceded Arkansas and its other possessions west of the Mississippi to Spain. The Spanish encouraged white settlement in the region, but when they returned the area to France in 1800, fewer than 1,000 persons lived in Arkansas. In 1803 the United States acquired Arkansas as part of the Louisiana Purchase.

Arkansas was part of the Louisiana District (1804-05), the Louisiana Territory (1805-12), and the Missouri Territory (1812-19) before being constituted, in 1819, as the Arkansaw Territory, which also included part of present-day Oklahoma. Arkansas Post was the capital from 1819 to 1821, when Little Rock was made the capital. Settlement of Arkansas was slow until the later 1820s, when the CHEROKEE and CHOCTAW Indians (who had become embroiled in disputes with whites after being moved to Arkansas by the federal government) were removed from the territory. By 1835 Arkansas had 50,000 white inhabitants, and on June 15, 1836, it entered the Union as the 25th state. Black slaves supplied most of the labor for the productive cotton plantations of eastern and southern Arkansas; in 1860 Arkansas had about 111,000 black inhabitants, who constituted more than one-quarter of the total population.

The Civil War and Reconstruction

On the eve of the CIVIL WAR, Arkansas was almost equally divided between secessionists (mainly associated with cotton production) and antisecessionists (largely small farmers of the northwestern part of the state). In March 1861, a state convention voted against leaving the Union, but in May 1861, a month after the Civil War had begun, the convention voted for secession and Arkansas joined the CONFEDERATE STATES OF AMERICA. In March 1862, Union troops won a bloody battle at Pea Ridge (Elkhorn Tavern), and by early 1864 Confederate forces were confined to southern Arkansas, where they made the town of Washington the new state capital. A Union regime administered most of Arkansas from Little Rock.

The war ended in 1865, but during 1866-67 former secessionists controlled the state legislature and passed several measures restricting the rights of the recently emancipated blacks. As a result, Arkansas was placed under federal military rule in 1867. The state was readmitted to the Union in mid-1868, after a new constitution had been ratified. During 1868-74 Republicans controlled the state government; the period was marked by a violent clash over the outcome of the 1872 election for governor. Two Republicans, Elisha Baxter and Joseph Brooks, claimed victory in the close contest, and partisans of the candidates engaged in gun battles in 1874 until President Ulysses S. Grant intervened to help restore order; Baxter was declared governor. In elections later in 1874 the Democrats regained control of the state government.

“Arkansas (You Run Deep in Me)”