Springtail — Springtails (Order Collembola) form the largest of the three orders of modern hexapods that are no longer considered to be insects (along with the Protura and Diplura). The three orders are sometimes grouped together in a class called Entognatha because they have internal mouthparts, but they do not appear to be more closely related to one another than they are to the insects, which have external mouthparts. Recent genetic studies suggest that the Collembola are a separate evolutionary line from the other Hexapoda.

Members of Collembola are normally less than 6 mm in length, have six or fewer abdominal segments and possess an eversible tubular appendage (the collophore) projecting ventrally from the first abdominal segment. An abdominal, tail-like appendage, called the furcula, is present in most species and is folded beneath the body, to be used for jumping when the animal is threatened. There is a small structure called the retinaculum which holds the furcula in place under tension, and when it is released, the furcula snaps against the substrate, flinging the springtail into the air.

The suborder Arthropleona has an elongated body in contrast to the globular body of the Symphypleona.

Springtails are cryptozoa frequently found in leaf litter and other decaying material, where they are primarily detritivores, and one of the main biological agents responsible for the creation of soil. In sheer numbers, they are reputed to be one of the most abundant of all macroscopic animals, with estimates of 100,000 individuals per cubic meter of topsoil, essentially everywhere on the planet that soil occurs; only nematodes, crustaceans, and mites are likely to have global populations of similar magnitude, and each of those groups is of a higher taxonomic rank (nematodes are a phylum, crustaceans a subphylum, and mites are a subclass). Most springtails are small and difficult to see by casual observation, but one species, Hypogastrura nivicola (the so-called snow flea) is readily observed on warm winter days when it is active and its dark color contrasts sharply with a background of snow.

Various sources and publications have suggested that some springtails may parasitize humans, but this is entirely inconsistent with their biology, and no such phenomenon has ever been independently confirmed, though it has been documented that the scales or hairs from collembolans can cause irritation when rubbed into the flesh. 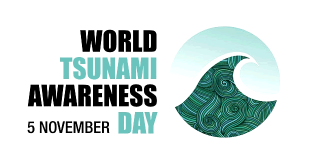 World Tsunami Awareness Day Information: Tsunamis are rare events, but can be extremely deadly. In …