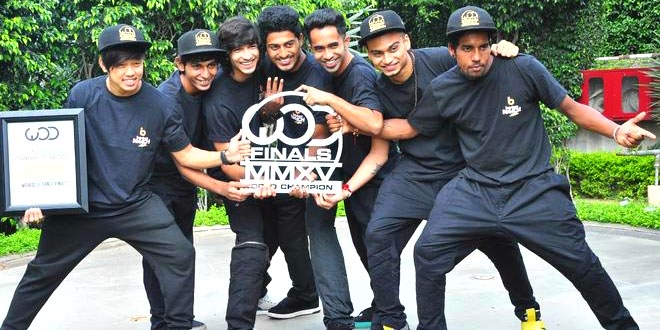 Seven members of Desi Hoppers, who cleverly mixed traditional dance forms with contemporary ones to win The World of Dance Championship in LA, are living each moment. For, they have proved they can dance!

These seven make a happy, peppy and playful bunch feeling on the top of the world, and, why not? Having just won The World Of Dance Championship, Desi Hoppers are out to celebrate their big win.

In Chandigarh, we see these seven take up the stage, break into a jig for the flimsiest of excuses and have fun at each other’s expense. “It was the first time that an Indian troupe got to participate in the WOD. We hadn’t gone to compete but enjoy being on such a huge platform,” opens Shantanu Maheshwari. In the competition in Los Angeles, this troupe beat 14 countries and 34 performances to make it to the top mid-August. They also won Crowd’s Favourite title.

Their secret to success? Sticking to their roots! The act that fetched them the coveted world title opened with a shloka and mudras picked up from Bharatnatyam and Tandav duly fused with contemporary on the beats of Choli ke, Jumme ke raat and Bhangra. “No doubt each team that made it to the championship was superb but out cultural touch made us odd and also win,” giggles the group that goes by ‘eat, sleep, naach, repeat’ mantra.

Along with Shantanu, Macedon De’mello and Nimit Kotian make that trio who went on to hunt the other four—Rohan Vyas, Viraj Pandya, Subhash Naidu and Niraj Lama — who were to become part of this awesome journey.

Together, along with another member Saneha, who couldn’t make it to LA for she was denied an American visa, they practiced for the prestigious fight and changed it from eight to seven member choreography in 10 days time in Mumbai. “We had never thought that we would reach WOD, forget winning it,” laughs Nimit.

What worked, however, was each one them being equally passionate about dance. “None is us has ever put self before dance. Never have we put any of us down but taken criticism in positive spirit. Where else you see someone teaching / correcting you,” says Rohan.

Niraj, known better as Jack, credits their super act, to charging international performances, “When we were stretching and warming up I saw the troupes I had always admired. I knew that I had made it there and I had to give my best too.”

Though, there were hardly any Indians in the audience, Rohan recalls the fan moment as a lady along with her partner came to see them backstage to share — ‘Your act really inspired me. I had given up on life but right now I am going back totally charged’— “That really made me feel, that we had arrived.”

They can’t stop talking about their big day, “We all were so nervous and backstage we saw a dholwala. We all danced in abandon and that got us in the groove.” says Viraj, who made most of the pool in the house they stayed in LA.

While they rocked on the dance floor, they almost got fined as they merrily crossed the road wherever they wished. “We were caught and the officer was about to fine us, but he just stopped and asked ‘Which country are you form? India, we replied. ‘Do you do that back home too’? We looked at each other and were about to say ‘haan’ but stopped just on time. A reverant ‘no’ saved us with a warning and lesson in jaywalking!”

Everyone wants to know what next for them. Mace makes it clear, “Hum saat ab saath hi rahengen.”

While the training continues, they will think on what next. “Having won WOD, obviously, we can’t dance anywhere and everywhere,” says Shantanu.

To witness their dream coming true, tune into Bindass Naach every Sunday at 7pm!