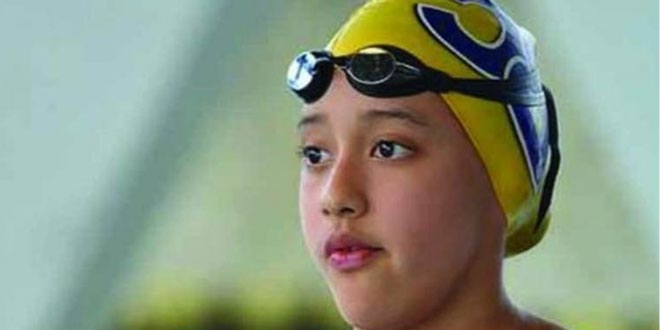 Representing your country at the biggest sporting event in the world is a daunting prospect for any athlete, but for 13-year-old Olympian Gaurika Singh, it pales in comparison with surviving an earthquake in her native Nepal.

At 13 years and 255 days, the swimmer will be the youngest to compete at the 2016 Rio Olympics when she takes to the pool for the women’s 100 metres backstroke heats on Sunday.

“That’s quite cool, a bit unreal too,” said Singh, who has broken seven national records.

“I wanted to go but wasn’t sure I’d be able to because I’d be too young. When I found out a month ago, it was a big shock.”

But it was nothing like the shock she experienced when the youngster, who moved to England with her family when she was two, and her mother and sister found themselves at the heart of the earthquake that struck Nepal when she returned to her home country in April last year to take part in the national championship.

“It was terrifying. We were on the fifth floor of a building (in the capital Kathmandu) that we couldn’t escape from. Fortunately, it was a new building so it did not collapse like others around,” the Barnet Copthall Club swimmer added.

As devastation struck close to heart and home, Singh chose to donate all winnings from the restaged championship to a charity set up by her father’s friend, who made her a goodwill ambassador.

Her proud father, Paras, said: “She’s special. It’s unbelievable that she’s the youngest Olympian in Rio and amazing how she copes with all the pressure.”

None of the shuttlers, shooters, archers and tennis players will attend the ceremony, while both …