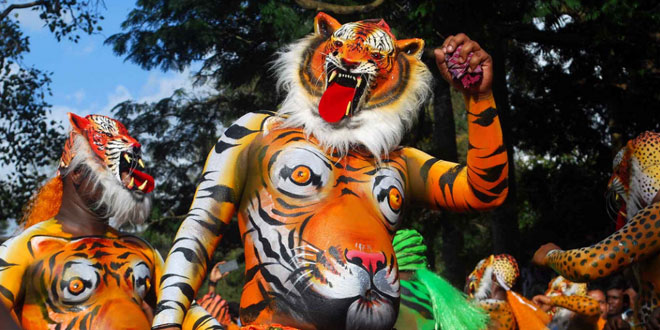 The state festival of Kerala – Onam – is celebrated with zeal by the Malayalees in the state as well as in different parts of the world. Marked with fun and fervor, the celebrations of the festival comprise of a wonderful spectrum of rituals and traditions followed by the people. The most important day of the festival is Thiruvonam (the tenth day of Onam), which is eagerly awaited by the people. Until some time back, the festival was only a private affair, a kind of family reunion. Today, it has taken the shape of a community function. Apart from the natives of Kerala, innumerable Malayalee Associations across India as well as abroad have taken the festival as the wonderful opportunity to rejuvenate the social ties, by organizing cultural programs during the festive season. Know more about the celebrations of Onam, by going through the following lines.

Attam marks the beginning of Onam. From the very first day, people put pookkalam (floral rangoli) at their entrance way, using a number of flowers. It is a tradition and a part of the celebrations of Onam festival. In the Malayalee committees, pookkalam competitions are held. Various designs, both simple and intricate are made using flowers like marigold, roses, jasmine, etc. Small children take pleasure in gathering flowers from their premises. Apart from the use of flowers, people make use of colors to decorate their Pookkalam. Hectic preparations for the ten-day carnival start from Attam.

Kaikotti kali (also known as Thiruvathira kali) is the main dance of Onam. This is the traditional dance, truly native to Kerala. Kaikotti kali is performed by middle-aged women, who stand around deepam (traditional Kerala deep). The women are clad in set saree (traditional Kerala dress) and accessorized with gold jewelry. Eight to twelve women can perform the dance. Another dance form that is performed during the season is known as ‘Pulikali‘ or ‘Kaduvakali‘. In this dance, performers (mostly men) paint themselves like tigers in bright yellow, red and black colors and dance ferociously to the accompaniment of musical instruments such as ‘udukku‘ and ‘thakil‘.

Onam is incomplete without games in it. The outdoor games such as ‘Talappanthukali‘ (ball game), ‘Kayyankali‘ (one-to-one fight between men, without using weapon), ‘Attakalam‘ (fight between men, played in groups) Ambeyyal (Archery) and ‘Kutu Kutu‘ (Kabaddi) are the popular Onam games, played with great enthusiasm and high level of energy, during the festive season of Onam. In some parts of Kerala, ‘Kummattikali‘ is played by artists (typically men), wherein they clad themselves with the attire made by using plaited grass and wear a big wooden mask.

Onam feast forms a prominent part of the celebration of the festival. Irrespective of the caste and religion, all the Malayalees feast on Thiruvonam. A number of lip-snacking dishes are prepared by people. Usually, a vegetarian meal is prepared, but non-veg items also form a part of the feast, in some parts of the state. Melt-in-the mouth payasams are made for the feast. It is believed that every Malayali should eat the Onam feast on the festival, even if he / she has to sell all the possessions.

Vallamkali or the popular snake boat race is a sporting event, organized at several parts of the state on uthratadhi nakshatram of Chingam (Malayalam month). Oarsmen take part enthusiastically in the Vallamkali. It is something is especially popular in the southern districts of Kerala. Apart from Onam, the vallamkali is organized annually at Aaranmula River situated in Pathanamthitta District of Kerala.

Last, but not the least – Onam calls for shopping of clothes and furbishes for the home. It is a part of the tradition of Onam, to wear new clothes and buy attire for the family and friends. Apart from clothing, people enjoy shopping for new furniture. During the festive season, season sales outlets open up (such as Government-owned chain of Maveli stores – fair price shops), which provide myriad items at economical rates.