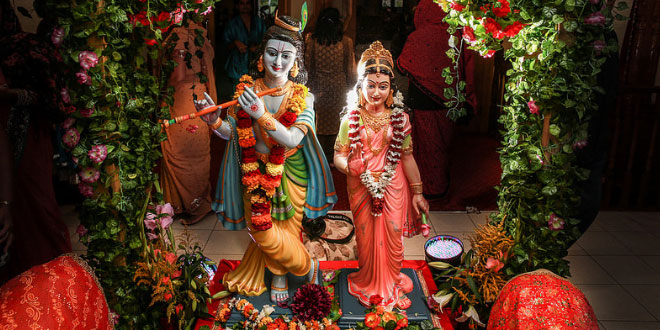 History of Janmashtami And It’s Origin

History of Janmashtami: Celebrated on the eighth day of Savana month, Janmashtami marks the birth of Lord Krishna, an avatar of Lord Vishnu. The festival is celebrated across the length and breadth of India, by people following Hinduism. In fact, it is an important day for Hindus. The celebration goes on for two days. On the first day, the Raslila (dance drama) is performed, which depicts the important phases of Shri Krishna‘s life. The merrymaking reaches it peak at midnight stroke, when aarti is performed and bhajans are sung to praise the Lord. Small children are dresses as the young Krishna and his playmate Radha. Then there are folklores and stories which are recited on the occasion, they are generally connected to the history of Janmashtami, which can be traced back to the ancient era. Read the following lines to get information on the history of Janmashtami.

The history of Janmashtmi dates back to thousand years. There are also several legends and stories associated with this festival. If you start exploring the origin of the festival, you will end up listening to thousands of folklore related to Krishna and his birth. It is believed that Lord Krishna was the incarnation of Vishnu, one of the three most important Hindu Gods. It is commonly believed that he took birth for killing Kansa, the unreligious demon king of Mathura and other demons, to establish a kingdom of peace, prosperity and religion on earth and to spread the message of brotherhood and humanity.

In his preaching to Arjuna in the Holy Bhagvad Gita he says “Whenever the balance of the universe is disturbed by external interference from any of its parts, then I reveal myself as the Power of eternal balancing. For the protection of those who are in harmony, and the rectification of everything disharmonious, I incarnate myself at every juncture of time.” So, it is assumed that the form of God will return back on earth for the establishment of peace, religion and prosperity in society once again when required. The celebration of Janmashtami is also a way to commemorate his holy deeds on earth for the mankind.

Historians calculate that the birth of Lord Krishna goes back to the Dwapar Yug. It is in the year of Visvavasu around 3227 BC when Lord Krishna was born. He was born on a dark, stormy night on the day eight day of the second fortnight of the month of Shravana which now corresponds to the month of August-September in the Gregorian calendar. Born in the prison of Demon Kansa, from Kansa’s sister Devaki and Vasudeva, Krishna was declared to be the savior of mankind and the end of Kansa even before his birth. Krishna, right from the day of birth exhibited that he was a special child and there was extraordinary powers with him. Throughout his childhood and adolescence in Gokul, he did many things which made people believe that he was a form of God. Since then, the people of Nandgaon celebrated the birth of Krishna as a day of fortune.

Even thousands of years after his heavenly abode, people observe this day as a day of fortune and commemorate the birth of Lord Krishna by fasting and feasting. People believe Krishna to be the ultimate savior of the world. One who unlike other gods, can be regarded, as a lover, friend, divine guru or one’s own child. People mesmerized with Krishna’s persona and deeds can be seen singing and dancing in the name of Krishna to eternity on the day of Janmashtami. It is the deep faith and devotion of people towards him that the festival is still celebrated with a great honor, joy as well as elation as it was celebrated thousands of years back.