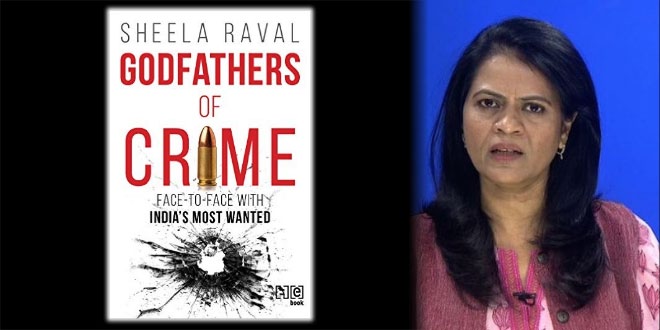 Godfathers of Crime: Face-to-Face with India’s Most Wanted – Sheela Raval

The only journalist allowed at the wedding of Dawood Ibrahim’s daughter (where she even managed to exchange greetings with him), to talk to Chhota Rajan after a bid on his life, get called by Dawood’s loyal lieutenant Chhota Shakeel for his version (and made to depose in a case against him), and meet most of India’s most wanted, it has been an eventful career for someone who got “covering the underworld by default”.

An expressed longing for “some adventures in life” landed Sheela Raval a job in Gujarati Samachar’s Mumbai edition in 1988. Though she covered the usual city beats, she only knew how prophetic her words would be after shifting to India Today’s Gujarati edition in 1994, to the main English edition and then TV. When she began her media career, she thought that like women reporters then, she would be focussing on “softer issues”, not “hard, mainstream reportage”, and could never have imagined that “I would be writing extensively on Mumbai’s gang wars and chasing global terrorists across continents in search of scoops and stories a decade later”.

Godfathers of Crime: Face-to-Face with India’s Most Wanted

It is these stories she tells her in her first book – a gripping history of organised crime syndicates of the country’s financial capital, their bloody feuds, and their transformation into more sophisticated but lethal avatars.

Though she had interviewed local don Arun Gawli in his fortified tenement in 1990, Raval says her acquaintance with high levels of organised crime began with three phone calls in 1994.

Given what was purported to be Chhota Shakeel’s phone number, she decided to check it out. On the first try, she was told that he was sleeping and she should call later and on the second call, her details were noted. The next evening, the don called back, “introduced himself formally”, in a tone “mild yet very authoritative”: “Main Shakeel Bhai bol raha hoon. Farmaiyen Sheela-ji?”

This began a privileged access to the trusted aide of India’s most wanted man, which has lasted since then – with a break of a few years after she was a witness in a case against him.

In the two decades since that phone call, Raval managed to talk to, meet or interview, across four continents, almost every leading contemporary Mumbai underworld figure (save Dawood, with whom she has been promised the first interaction if and when he decides to speak to media) and their families. They include Dawood’s younger sibling Ibrahim Kaskar who came back to India, Muhammad Iqbal Memon “Iqbal Mirchi” in London, Abu Salem as well as his first wife Samira Jumani, whom she diligently tracked down in Atlanta after Salem and his companion Monica Bedi were extradited to India and convinced to tell her story.

These comprise the first part, entitled “Encounters with D Company”, and include an interlude about being made a witness in the case against Shakeel. The second part, the ‘Hindu‘ dons is about meetings with Chhota Rajan soon after the attack on him (and breaking the news that he had survived), Santosh Shetty, Ashwin Naik and Gawli.

Packed with telling anecdotes, perceptive profiles (she found Abu Salem to be the most menacing) and penetrating insight, this book is not only a meticulously-researched history of Mumbai‘s criminal empires but also an account of their transformation into international entities with considerable clout in several countries and their use by various interested parties for geo-political games – though she does not go too deep into this.

It also highlights how these individuals rise by extrajudicial methods of solving various issues and disputes that are the responsibility of state (executive and judiciary) but are ignored, interminably delayed, or dealt with in partial manner.

But above all, it underscores how being a top crime reporter doesn’t only need privileged access to key members of the underworld and the law and order machinery but also maintaining professional credibility and objectivity to satisfy both sides – who are easily enraged, have long memories and a longer reach!