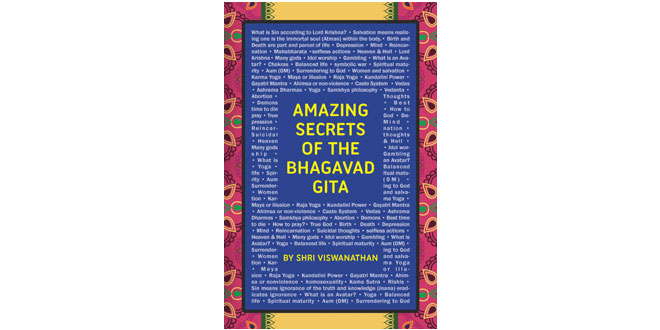 When E.D. Viswanathan published his “Am I a Hindu?” – which took the form of a lively discussion between a 14-year-old American born Indian and his father, covering all aspects of Hinduism — it proved an instant hit. The author follows the same style to explain, lucidly, what the Bhagavad Gita is all about.

This time the discussants are an inquisitive grandson and an informed grandfather. This is not another translation or commentary on the immortal Gita. Instead of explaining each verse and each chapter, the book gives a summary of the ideas and concepts found in the Gita, organised according to easy-to-refer topics.

No issue relevant to modern living is overlooked: caste system, status of women, Sati, mind, sense organs, how to deal with stress, spirituality as well as the best time to pray – and the best time to die! Eating like a glutton, neglecting one’s studies, constantly staying on social media like Facebook, texting, drinking and using drugs are all examples of life controlled by the sense organs.

As Viswanathan explains, “Many have no idea that they do not have to be a Hindu to become a yogi. If they fit the definition of a yogi, even billionaires and pretty models can be called yogis.” The book, the author says, is aimed at people between the age of 18 and 30 who normally do not have countless hours to study the Bhagavad Gita. This, then, is a useful ready reckoner.