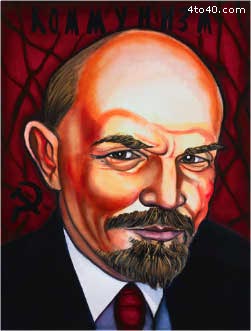 Vladimir Ilyich Lenin — Vladimir Ilyich Ulyanov, alias Lenin (22 April 1870 – 21 January 1924) was a Russian communist revolutionary, politician and political theorist. He served as head of government of the Russian Soviet Federative Socialist Republic from 1917, and of the Soviet Union from 1922 until his death. Under his administration, the Russian Empire was replaced by the Soviet Union; all wealth including land, industry and business was nationalized. Based in Marxism, his political theories are known as Leninism.

David Remnick “Not Long After The Bolsheviks” had seized power in 1917, Vladimir Ilyich Lenin filled out a bureaucratic questionnaire. For occupation, he wrote “man of letters”. So it was that a son of the Russian intelligentsia, a radical straight from the pages of Dostoyevsky’s novel The Possessed, become the author of mass terror and the first concentration camps ever built on the European continent.

Lenin was initiator of the central drama – the tragedy – of our era, the rise of totalitarian states. A bookish man with a scholar’s habit and a general’s tactical instincts, Lenin introduced to the twentieth century the practice of taking an all embracing ideology and imposing it on an entire society rapidly and mercilessly; he created a regime that erased politics, erased opposition. In his short career in power, from 1917 until his death in 1924, Lenin created a model not merely for his successor, Stalin, but for Mao, for Hitler, for Pol Pot.

And while in this way Lenin may be the central actor who begins the twentieth century, he is the least knowable of characters. As a boy growing up in Simbirsk, Lenin distinguished himself in Latin and Greek. The signal event of his youth – the event that radicalized him – came in 1887, when his eldest brother, Alexander, a student at the University of St. Petersburg, was hanged for conspiring to help assassinated Czar Alexander III. As a lawyer, Lenin became increasingly involved in radical politics, and after completing a three-year term of Siberian exile, he began his rise as the leading communist theorist, tactician, and party organizer.

In his personal relations with colleagues, family, and friends, Lenin was relatively open and generous. Unlike many tyrants, he did not crave a tyrant’s riches. Even when we strip Lenin of the cult that was created all around him after his death, when we strip away the myths of his “superman kindness”, he remain a peculiarly modest figure who wore a shabby waistcoat, worked sixteen-hour days, and read extensively. (By contrast, Stalin did not know that the Netherlands and Holland were the same country, and no one in the Kremlin inner circle was brave enough to set him straight).

Before he came the general of the revolution, Lenin was its pedant, the journalist – scholar who married Marxist theory to an incisive analysis of insurrectionist tactics. His theories of what society ought to be and how that ideal must be achieved were to products of thousands of hours spent reading.

“The incomprehensibility of Lenin is precisely this all-consuming intellectuality – the fact that from his calculations, from his neat pen, flowed seas of blood, where as by nature this was not an evil person”, writes Andrei Sinyavsky, one of the key dissidents of the 1960s. “On the contrary, Vladimir Ilyich was a rather kind person whose cruelty was stipulated by science and incontrovertible historical laws. As were his love of power and his political intolerance”.

For all his learning, Lenin began the Bolshevik tradition of waging war on intellectual dissidents – of exiling, imprisoning, and executing thinkers and artists who dared oppose the regime. He was a “man of letters” of a particular sort. In the years before and after the October 1917 coup, Lenin was the avatar of a group of radical intellectuals who sought a revolution that did not merely attempt to redress the economic balances under czarism. Instead Lenin made a perverse reading of the Enlightenment view of man as modeling clay and sought to create a new model of human nature and behavior through social engineering of the most radical kind.

“Bolshevism was the most audacious attempt in history to subject the entire life of a country to a master plan”, writes Richard Pipes at the end of his two-volume history of the revolution. “It sought to sweep aside as useless rubbish the wisdom that mankind had accumulated over millennia. In that scene, it was unique effort to apply science to human affairs: and it was pursued with the zeal characteristic of the breed of intellectuals who regard resistance to their ideas as proof they were sound”.

It is, perhaps, impossible to calculate just how many tens of millions of murders “flowed” from Leninism. Certainly Stalin differed from Lenin in the length of his time as dictator – some twenty-five years to Lenin’s six – and he also had the advantage of greater technology. As a result, Stalin’s murderous statistics are superior to Lenin’s. And yet Lenin contributed so very much.

In some scholarly circles in the West, Stalin was seen as an “aberration”, a tyrant who prevented Lenin’s intensions at the end of Lenin’s life. But as more and more evidence of Lenin’s cruelty emerged from the archives, that notion of the “good Lenin” and the “bad Stalin” become an academic joke. Very few of Stalin’s policies were without roots of Leninism: it was Lenin who built the first camps; Lenin who set off artificial famine as a political weapon; Lenin who disbanded the last vestige of democratic government, the constituent Assembly, and devised the Communist Party as the apex of a totalitarian structure; Lenin who first waged war on the intelligentsia and on religious believers, wiping out any traces of civil liberty and a free press.

Since the Soviet archives became public, we have been able to read the extent of Lenin’s cruelty, the depths of its vehemence. Here he is in 1918, in a letter instructing Bolshevik leaders to attack peasants who did not accept the revolution: “Comrades!… Hang (hang without fail, so that people will see) no fewer than one hundred known kulaks, rich men, bloodsuckers… Do it in such a way that… for hundreds of versts around, the people will see, tremble, know, shout: ‘they are strangling and will strangle to death the bloodsuckers kulaks’… Yours, Lenin”.

Among those artists and writers who survived the revolution and its aftermath, many wrote paeans to Lenin’s intelligence that sound like nothing so much as religious songs of praise. The poet Mayakovsky would write, “Then over the world loomed/Lenin of the enormous head”. And later, the prose writer Yuri Olesha would say, “Now I live in an explained world. I understand the cause, I am filled with a feeling of enormous gratitude, expressible only in music, when I think of those who died to make the world explained”.

By the Brezhnev era, Lenin’s dream state had devolved into corrupt and failing dictatorship. Only the Lenins cult persisted. The ubiquitous Lenin was a symbol of the repressive society itself. Joseph Brodsky, the great Russian poet of the late twentieth century, began to hate Lenin at about the time he was in the first grade, “not so much because of his political philosophy or practice… but because of the omnipresent images which plagued every textbook, every class wall, postage stamps, money, and what not, depicting the man at various ages and stages of his life… This face in some ways haunt every Russian and suggests some sort of standard for human appearance because it is utterly lacking in character… coming to ignore those pictures was my first lesson in switching off, my first attempt at estrangement”.

When Mikhail Gorbachev instituted his policy of glasnost in the late 1980s, the Communist Party tried to practice a policy of regulated criticism. The goal was to “deStalinize” the Soviet Union, to resume Khrushechv’s liberalization in the late 1950s. But eventually, glasnost led to the image of Lenin, not least with the publication of Vassily Grossman’s Forever Flowing, a novel that dared compare Lenin’s cruelty to Hitler’s. While he was in office, Garbachev always called himself a “confirmed Leninist”: it was only years later when he too – the last General Secretary of the Communist Party – admitted, “I can only say that cruelty was the main problem with Lenin”.

After the collapse of the coup in August 1991, the people of the Leningrad voted to call their city St. Petersburg once more. When Brodsky, who had been exiled from the city in 1964, was asked about the news, he smiled and said, “Better to have named it for a saint than a devil”.