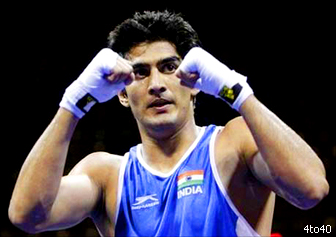 Vijender Singh — Vijender Singh Beniwal (born 29th October, 1985) is an Indian boxer who won the Bronze medal in Olympics, Beijing born to a Hindu Family in Kalwas village, Bhiwani district in Haryana. He did his schooling in his village only and also received his bachelors degree in local collage in Bhiwani. Vijender was a athletic and had a great dedication for sports, he used to practiced boxing at the Bhiwani Boxing Club through Coach Jagdish Singh who appreciated his talent and encouraged him to take it as his profession.

Vijender started competing for sub-junior nationals and national level competitions. He started playing for India in 2003 in Afro Asian Games. His boxing style hooks & uppercut were very similar to Hollywood movie star Sylvester Stallone. In 2004 Vijender went to compete Athens Summer Olympics in the welterweight division, in 2006 he defeated Englands Neil Perkins in the semifinal in Commonwealth Games. Also he played in Asian Games Doha where he won Bronze medal. In 2008, he qualified for Beijing Olympics scored himself and his country a bronze medal in Middleweight championship tournament.

After his Olympics win, Vijender emerged into the eyes of media as the medalist took part in Ramp Shows. Vijender also appeared in Salman Khans Game show 10 ka dum with Mallika Sherawat and also appeared in Indian Dance Realty show Nach Baliye with actor Bipasha Basu. Its also heard his taking up roles in Indian movies that would be coming up recently.