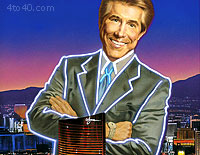 Stephen Alan “Steve” Wynn (born January 27, 1942) is an American casino resort/real-estate developer who has been credited with spearheading the dramatic resurgence and expansion of the Las Vegas Strip in the 1990s. His companies refurbished or built some of the most currently widely recognized resorts in Las Vegas such as the Golden Nugget, The Mirage, Treasure Island, Bellagio, Wynn, and Encore.

In April 2010, Wynn caused a stir when he chided the government on CNBC and said he was considering moving the company’s global headquarters from Las Vegas to Macau. A few weeks later, amidst criticism from his rivals, he clarified that he meant a greater allocation of time spent in Macau because of the substantially higher profits made there.

Wynn was born Stephen Alan Weinberg in New Haven, Connecticut. His father, Michael, changed the family’s last name in 1946 from “Weinberg” to “Wynn” when Steve was six months old “to avoid anti-Jewish discrimination” according to several sources. Wynn was raised in Utica, New York, and graduated from The Manlius School, a private boys’ school east of Syracuse, New York, in 1959. Steve Wynn studied cultural anthropology and English literature at the University of Pennsylvania, where he was a member of the Sigma Alpha Mu fraternity.

Wynn’s father ran a string of bingo parlors in eastern United States. In 1963, his father died of complications from open heart surgery in Minneapolis, leaving $350,000 of gaming debts, shortly before Wynn graduated from Penn with a Bachelor of Arts degree in English Literature.

Wynn took over running the family’s bingo operation in Maryland. He did well enough at it to accumulate the money to buy a small stake in the Frontier Hotel and Casino in Las Vegas, where he and his wife Elaine moved in 1967. Between 1968 and 1972 Wynn also owned a wine and liquor importing company. He managed to parlay his profits from a land deal in 1971 (the deal involved Howard Hughes and Caesars Palace) into a controlling interest in the landmark downtown casino, the Golden Nugget Las Vegas (he also owned The Golden Nugget in Atlantic City, New Jersey). Wynn renovated, revamped and expanded the Golden Nugget from a gambling hall to a resort hotel and casino with enormous success, in the process attracting a new upscale clientele to downtown Las Vegas.

The Mirage, Treasure Island and Bellagio

Wynn had previously acquired interests in various existing casinos. His first major Strip casino, The Mirage, which opened in 1989, set a new standard for size and lavishness, with construction costs to match. The Mirage featured an indoor forest and an outdoor “volcano”, and with high-quality room appointments and an emphasis on service, The Mirage was another great success. The Mirage was the first project in which he was involved in the design and construction of a casino. The $630 million cost to build The Mirage was financed largely with junk bonds issued by Michael Milken. The Mirage was considered a risky venture by the standards then prevailing in Las Vegas because of its high cost and emphasis on luxury. However, it proved to be enormously successful and made Wynn a major part of Las Vegas history.

Wynn expanded further on his concept of the luxury casino with Bellagio, a $1.6 billion resort, including an artificial lake, indoor conservatory, a museum-quality art gallery and branches of high-end boutiques and restaurants from Paris, San Francisco, and New York City. The architect was the famous American Jon Jerde of The Jerde Partnerships. When built, Bellagio was the most expensive hotel in the world. The Bellagio is credited with starting a new spree of luxurious developments in Las Vegas. Among these developments include The Venetian, Mandalay Bay, and Paris Las Vegas.

He also designed and built a luxury resort, the Beau Rivage, in Biloxi. Beau Rivage was originally the name he wanted to give to the Bellagio. He then went to Italy on vacation and decided Bellagio was a better name for the hotel.

Wynn Las Vegas to Wynn Macau to present and Encore

Mirage Resorts was sold to MGM Grand Inc. for $6.6 billion ($21 a share) in June 2000 to form MGM Mirage. Five weeks before the deal was closed (April 27, 2000) Steve Wynn purchased the Desert Inn for $270 million. He closed the Inn in only 18 weeks, and with the money he made on that deal, and with his ability to secure ever-greater financing, Steve Wynn took Wynn Resorts Limited public in 2002. Wynn became a billionaire in 2004, when his net worth doubled to $1.3 billion. On April 28, 2005 he opened his most expensive resort to that date, the Wynn Las Vegas, on the site of the former Desert Inn.

Wynn successfully bid for one of three gaming concessions that were opened for tender in Macau, a Special Administrative Region (SAR) of China, which has a long history of gaming and is the largest gaming market in the world, having surpassed Las Vegas in 2006. This property, known as Wynn Macau, opened on September 5, 2006.

In the summer of 2008, hiring began for Encore Las Vegas, the newest in Steve Wynn’s collection of resorts (the tower of Encore is modeled after the Wynn Las Vegas tower, and in fact, they share the same “property” though they are separate hotels). Wynn hired 3500 employees for this property. Encore opened on December 22, 2008.

Wynn owns an extensive art collection including paintings by Paul Cezanne, Paul Gauguin, Vincent van Gogh, Edouard Manet, Henri Matisse, Pablo Picasso, Andy Warhol, and Johannes Vermeer (although the authenticity of the “Vermeer” remains in dispute). Recently he spent a record price for a painting by J. M. W. Turner, $35.8 million for the Giudecca, La Donna Della Salute and San Giorgio and spent $33.2 million on a Rembrandt, the auction record for the artist.

Many of the collection’s pieces were on display at the Bellagio. The collection was on display at the Nevada Museum of Art in Reno while the Wynn Las Vegas was being constructed and was installed in the resort shortly before it was opened. The Wynn Las Vegas gallery, which had charged an entrance fee, closed shortly after the start of 2006. The artwork from the former gallery is now scattered around the resort. Although the artwork is owned personally by Wynn, Wynn Resorts pays an annual lease of $1. As part of the lease agreement, insurance and security are the responsibility of the company.

The centerpiece of the collection is Le Rêve, the Picasso portrait that was the working name of the resort project. Wynn purchased the painting in 1997 for $48.4 million. In 2006 he reportedly was to sell it to Steven A. Cohen for $139 million, which would at that time have been the highest price paid for any piece of art. However, he put his elbow through the canvas while showing the painting to a group of reporter friends to which he had just revealed the alleged sale. This canceled the sale, and after a $90,000 repair, the painting was estimated to be worth $85 million. Wynn sued his insurance company over the $54 million difference with the virtual selling price, possibly exceeding his own buying price. The case was settled out of court in April 2007.

Wynn met Elaine Farrell Pascal when Wynn’s father Mike and Elaine’s father were joking around about both their kids meeting and going on a date. Wynn and Elaine became college sweethearts, married in 1963, divorced in 1986, married a second time in 1991, and filed for divorce again in 2009. Elaine Wynn remains a director of the company’s board. Wynn once said he bought the Desert Inn casino, the site of his Wynn Las Vegas, as a birthday gift for his wife.

They have two daughters, Kevyn and Gillian. Kevyn was kidnapped in 1993 and Wynn paid $1.45 million in ransom for her safe return. The kidnappers were apprehended when one attempted to buy a Ferrari in Newport Beach, California, with cash. Kevyn was found unharmed several hours later.

His cousin John was named CEO of Benison International in March of 2010.

In May 2006, Time magazine included Wynn as one of the World’s 100 Most Influential People.

Wynn was appointed to the Board of Trustees of the John F. Kennedy Center for the Performing Arts by President George W. Bush on October 30, 2006.

In November 2006, Wynn was inducted into the American Gaming Association Hall of Fame.