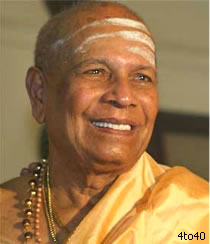 Sri K. Pattabhi Jois, or Sri Krishna Pattabhi Jois, counts amongst the world-renowned yoga teachers of India. A student of Sri Tirumalai Krishnamacharya, he is currently teaching at the Ashtanga Yoga Research Institute of Mysore, founded by him. His yoga shala attracts thousands of foreign students every year. Let us move on further to explore the complete biography of Sri K. Pattabhi Jois.

Sri K. Pattabhi Jois was born as Krishna on 26th July 1915 in the village of Kowshika, situated near Hassan city of Karnataka. It was at the age of twelve years that Krishna realized his aim in life. In his twelfth year i.e., 1927, he attended a lecture and demonstration given by S. T. Krishnamacharya in the Hassan city. Pattabhi Jois got so impressed by the lecture that, on the very next day, he became Krishnamacharya’s student and continued his study for the next twenty-five years.

In the year 1929, Jois ran away from his home and went to Mysore, in order to study Sanskrit. By coincidence, Krishnamacharya also left Hassan to teach somewhere else. Somehow, he also made his way to Mysore and met Jois once again after a gap of two years. During this time, Krishnamacharya had cured Maharaja of Mysore, Krishna Rajendra Wodeyar, of a very seriously illness. As an expression of his gratitude, the Maharaja had established a Yoga shala for him on the palace grounds.

Sri K. Pattabhi Jois remained with his Guru until 1941, when he left for Madras. However, Jois continued staying in Mysore after wards and married a young woman named Savitramma (popularly known as Amma), with whom he fell in love. The marriage took place in June 1937 and they were later blessed with three children Saraswati, Manju and Ramesh. In 1948, Sri K. Pattabhi Jois managed to buy a home in a section of town, called Lakshmipuram, with the help of his students.

After buying the house, he established the ‘Ashtanga Yoga Research Institute’ there. Jois taught yoga at the Sanskrit College for a number of years and became a professor in 1956. In 1958, he started writing Yoga Mala, which was published in India in 1962. The first English version of the book came out in 1999. Even today, Jois teaches yoga, with his daughter Saraswati and his grandson Sharath, at the Ashtanga Yoga Research Institute, which is now located in the neighborhood of Gokulum.