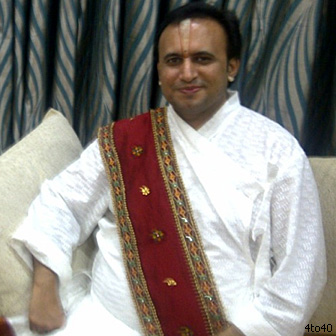 Shri Yadunathji earned his graduation from Gujarat University. His divine speech has aptly propagated ideas and principles laid down by Shri Mahaprabhuji to the Pushtimargiya Vaishnavs and the world as a whole. He has made tremendous efforts and contribution for Pushtimarg by applying the core principal of Pushtimarg in daily life of the Vaishnavs.

Shri Yadunathji has explained various Granths of Pushtimarg as well as Hindu civilization in general. He has also authored many books, “Madhuram – I” being one of them. His Holiness divine vachnamrut on Yamunaji’s 41 Pad has been tremendously appreciated by the vaishnavs and has made revolution in Pushtimarg. His discourse on Shrimad Bhagvatji has mesmerized vaishnavs and earned him lot of respect. His Holiness has minutely explained the principles of seva kram and transferred the vaishanavs from doing mere “reet” to do “preet”. Shri Yadunathji has made enormous efforts for propagating Pushtimarg to the whole world. Under His Holiness presidency many Haveli’s have been established throughout India at places like Mumbai, Chennai etc. His Holiness has explored various other countries besides India, in continents such as Asia, Africa, Europe, and Australia.

Shri Yadunathji has also started paathshala for pushtimargiya children so that the very principle of Pushtimarg is laid down in the next generation from the very beginning of their life. Shri Yadunathji is also engaged in various activities for the betterment of the being itself. His Holiness has centered many Dhyan Shibirs around the world which helped people to understand their internal energy which they possess and divert it to better their daily life. His Holiness’ lectures on management of time and energy are equally accepted to the world community. Shri Yadunathji under His guidance has conducted many blood donation camps at various institutions in India.

Under His Holiness’ presidency, “Shri Pushti Parivar” was established in the year 2004, with an aim to integrate the scattered energy and utilize it for a larger and better purpose for the propagation of Pushtimarg. Various activities are carried out by the trust under the pertinent guidance of Shri Yadunathji. Some of them which includes developing and maintaining Gaushala, which with His Holiness untiring efforts and blessings has already been completed at Kadi, where more then 10 cows are being maintained in good conditions and facilities. Shri Yadunatji also aims at providing high level medical facilities to the vaishnavas with a medical van for vaishnavas in remote areas. The trust also aims at maintaining funds for which needful vaishnavas who can apply for loans to complete their social duties such as marriages, social function etc.

“Vaishnav Kalyan Nidhi Fund” is a unique scheme framed by Shri Yadunathji, through which a person could become a member of pushti parivar by donating mere hundred rupees per month. The aggregated fund is then utilized for achieving the goals laid down by the trust and thereby fulfilling the dream of Vaishnavas.

One of the dream of Shri Yadunathji for the vaishnav community is to develop Vaishnav avas where the vaishnavas could live with a feeling of being at home. “Shri Yamunakuj” which is going to be laid down at Shri Jatipura will fulfill this quest. Shri Yamunakunj is a striking example of His Holiness untiring efforts to do something for Pushtimargiya vaishnav and it would emerge as a model for other such Vaishanv avas in future.