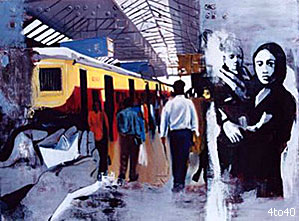 Ratnadeep Adivrekar — Ratnadeep Gopal Adivrerkar (born November 13, 1974, Mumbai) is a contemporary artist from India. Born in 1974, he is the son of famous artist Gopal S. Adivrekar. He received his BFA in painting with first class from the Sir J. J. School of Art in Mumbai. He has had several important solo exhibitions Like “Memoirs of the Unreal city”, “Refraction of Ideas”, and has participated in many important group exhibitions like Pictures of Asia, Larasati, Singapore, ‘Indian contemporary art’, Chelsea Art College, U.K., Ao~rta Project, BBK Kunst Forum, Dusseldorf and Ausstellungshalle Innenhafen, Duisburg, Germany.

Ratnadeep Gopal Adivrekar is an artist whose work defies easy definitions, having experimented with a wide range of styles and subject matter, bringing together metaphors from contradictory or unpredicted sources, both historical and contemporary, by using diverse materials and techniques. In fact Ratnadeep’s artistic multiplicity, and his resistance to any form of categorization, can be seen as the consistent theme in his work. The parts of painting have naturalist approximate based on photographic documentations. When a photograph is painted on canvas, the sense of realness in the images are complicated, while they may retain a high degree of verisimilitude, the loss of its mechanical tie to a specific situation. While our eyes perceive these paintings as photography, conceptually we know they are individual interpretations. Ratnadeep has rejected mechanical processes, preferring to explore the visual effects of mechanical technology by hand. Ratnadeep’s paintings have usually used techniques which are both time-consuming and physically demanding. Buried within this elaborate surface sometimes are sheets of manipulated expressive color drips transparent enough and mark making, bringing out the rawness of improvisation. His work refers directly to the enigma of metamorphosis and his imagery whispers to the subconscious coaxing it to the surface. Making us aware of Ratnadeep’s beliefs, the richness of his symbolism but yet mysterious eluding the logically understandable things and the depth of his ambitions – which combine to make new resonances. 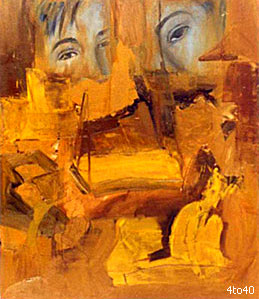 Ratnadeep Gopal Adivrekar throughout his lifetime has tried out a wide array of styles and subject matter. He always attempted to bring together images from confounding or unpredicted sources. Sometimes the metaphors are historical, while sometimes they are contemporary. To give them a shape he uses distinctly dissimilar or unlike materials and techniques. As an artist, Ratnadeep Gopal Adivrekar can be reckoned imputable to his artistic multiplicity. `Resistance to any form of categorisation` is his theme of work which he has maintained throughout his life time. Based on photographic documentations, paintings of Ratnadeep Gopal Adivrekar can be regarded as something that are very close to nature.

The sense of realness present in an image becomes rarified, when a photograph is painted on canvas. When these paintings hold a high degree of fancy, it liberates its mechanical association to a specific situation. Paintings are individual interpretations. But when others see these paintings, they perceive them as photography. The mechanical processes of paintings have been rejected by Ratnadeep Gopal Adivrekar. He explores the visual effects of mechanical technology only with hands. In Ratnadeep`s paintings one can find both the time-consuming and physically demanding techniques.

Hidden within this luxuriant surface sometimes are sheets of expressive colour dribbles, lucid enough, bringing out the rawness of unplanned creation. His work like a shot refers to the conundrum of metamorphosis. His ability to form mental images of things or events, speaks softly without vibration of the vocal cords to the subconscious, ingratiatory to the surface. Ratnadeep Gopal Adivrekar`s works makes us aware of his beliefs, the mellowness of his symbolism. His symbolisms also include inscrutably circumventing the logically apprehensible things and the depth of his ambitions – which combine to make new resonances.

The characteristics of Ratnadeep Gopal Adivrekar`s paintings admit bundles of people, masses gathered, loads of them piled together. The characters are great in number, but at the same time they do not have any weight. It contains the peculiar and `unbearable lightness` of their being, which in certain cases makes one to stop over and look back once more. Through the works of Ratnadeep Gopal Adivrekar, time and space in one particular dimension walks together. They even look alike from the macro level. Like an impenetrable solid mass time gets mesmerised, still, and unintelligible.