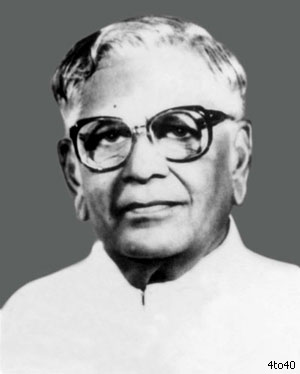 R Venkataraman — Shri Ramaswamy Venkataraman was the 8th President of the Republic of India, serving from 1987 to 1992. Before his election as President, he served nearly 4 years as the 7th Vice-President. A member of the Indian National Congress party, he held various ministerial positions in the course of his political career. His life train stopped on 27th January 2009.

Venkataraman was born in Pattukottai, near Thanjavur in Tamil Nadu. Educated locally and in the city of Madras (now Chennai), Venkataraman obtained his Master Degree in Economics from Madras University. He later qualified in Law from the Law College, Madras. Venkataraman was enrolled in the High Court, Madras in 1935 and in the Supreme Court in 1951.

While practicing Law, Venkataraman was drawn into the movement for India’s freedom from Britain’s colonial subjugation. His active participation in the Indian National Congress’s celebrated resistance to the British Government, the Quit India Movement of 1942, resulted in his detention for two years under the Defence of India Rules. Venkataraman’s interest in the Law continued during this period. In 1946, when the Transfer of Power from British to Indian hands was imminent, the Government of India included him in the panel of lawyers sent to Malaya and Singapore to defend Indian nationals charged with offences of collaboration during the Japanese occupation of those two places. In the years 1947 to 1950, Venkataraman served as Secretary of the Madras Provincial Bar Federation.

Venkataraman acquired, early in his legal career, an abiding interest in the law pertaining to labour. On his release from prison in 1944, he took up the Organisation of the Labour Section of the Tamil Nadu Provincial Congress Committee. He founded, in 1949, the Labour Law Journal which publishes important decisions pertaining to labour and is an acknowledged specialist publication. He came to be intimately associated with trade union activity, founding or leading several unions, including those for plantation workers, estate staff, dock-workers, railway workers and working journalists. Ramaswamy Venkataraman died on 27th January 2009 at about 14:27 pm.

Although re-elected to Parliament in 1957, Venkataraman resigned his seat in the Lok Sabha to join the State Government of Madras as a Minister. There Shri Venkataraman held the portfolios of Industries, Labour, Cooperation, Power, Transport and Commercial Taxes from 1957 to 1967. During this time, he was also Leader of the Upper House, namely, the Madras Legislative Council.

Share
Previous Why does one need to boil milk repeatedly to preserve it without refrigeration?
Next Why are fingerprints of identical twins not alike, whereas that of two clones are supposed to be identical?