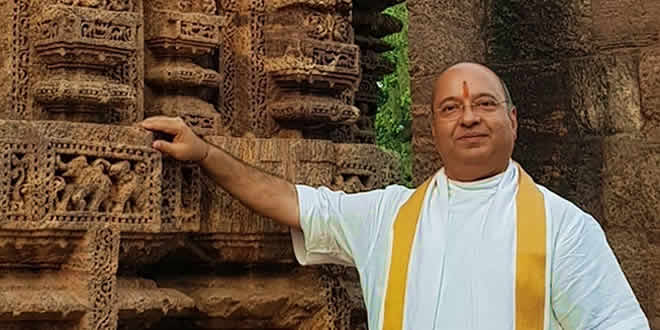 Pujya Shree Bhupendra Bhai Pandya — A perennial question that plagues the minds of all religiously and spiritually inclined people is that, ‘How does one recognize a true Guru?’ A true Guru is one who enlightens us about the treasures we have buried within ourselves, is instrumental in their expressions and eventually leads us to the realization of the whole, Purnatva. Through intellectual introspection, many souls have found this definition befitting Pujyashree Bhupendrabhai Pandya and have been introduced to their own selves!

Pujyashree Bhai, with his vast knowledge, lucid manner of presentation and proficiency in Gujarati, Hindi and English has been able to cross the barriers of language and touch innumerable lives. He possesses the rare ability of rationally interpreting the eternal principles and focusing on the applied aspect of religion with the theory rather than mere story telling. He does not stop at explanation but also suggests as to how these time-tested principles can be incorporated in our daily life so that we can experience a richer and wholesome life. Moreover there is a glow in his eyes, warmth in his words and the distinctive ability in his speech to strike the right chord in our heart, which lovingly invite us into the world of spirituality. Through this unique approach he has carved a niche in hearts of people world over, especially youngsters who till now looked down upon religion and considered it senseless. From the manner in which He speaks it is evident that whatever is being told is not simply read out aloud but greatly lived! Pujyashree Bhai has, thus, been instrumental in bestowing religion the pedestal it so rightly deserves.

Pujyashree Bhupendrabhai does not consider himself superior to another person or to any other form of life, as he sees divinity in all forms of life and honors it. He believes that the configuration of energy of the soul that formed it is unique and hence, each individual in this universe is unique.

Pujyashree Bhupendrabhai has contributed effectively to the qualitative transformation of mankind. It is under his divine guidance that many institutions such as the Samakti Foundation, Samakti Mission USA, Samakti Mission UK and Samakti Seva Parivar are active in uplifting the lives of the handicapped, and underprivileged by offering medical, social, educational, and spiritual aid.

Pujyashree Bhai has held many seminars, especially for youngsters every year across the globe. Participants not only of Indian origin but even the ones with their roots in the western soil are attending these events and are showing a keen interest in how they can apply ancient religious practices in contemporary times. Indeed, Pujyashree Bhupendrabhai represents the fountain of ‘triveni’ – knowledge based on the scriptures, clarity of thought and compassion for fellow human beings.

On the auspicious day of 21st November 1963, Pujyashree Bhupendrabhai Pandya was born in Mumbai to Purushottambhai and Gomatiben. According to the Indian calendar, it was Margshirsh Shukla Panchami, the holy day on which Lord Rama married Sita. Belonging to a religious Brahmin family, culture and values were an integral part of his upbringing. Pujyashree Bhupendrabhai Pandya’s grandfather, Ishwarbhai was a well-known religious preacher and a royal astrologer to various princely states.

At the tender age of two, even before he grasped his mother tongue, Gujarati, he fluently recited various Sanskrut shlokas. He spent two years of his primary schooling in his native place Sundhia, Gujarat, under the loving care of his grandmother, Devkorba. It was she who built a strong and sound foundation by narrating religious stories from Shreemad Bhagavat, Ramayana, Geeta, Mahabharat, Shiv Puran, Devi Bhagavat and various other scriptures of Sanatan Vedic Culture. The seeds of love and passion for our religion were thus sown here. He is indeed indebted to his grandmother and his village, which he so often remembers in most of his discourses. If not for this, he would have been deprived of both, his grandmother’s fond affection and his experiences of a rural life since the rest of his education continued in Mumbai.

As a student, Pujyashree Bhai was brilliant and a regular first ranker. All his teachers were very fond of him and his popularity amongst the students was amazing. Being a voracious reader right since childhood, he knew most of the books in his school library and therefore was appointed the in-charge. His love for reading complemented by his naturally gifted oratory skill won him numerous trophies at the school and inter-school elocution as well as debate competitions. He inculcated moral values in his classmates by teaching them to recite the ‘saraswati Vandana’ before each class. Having scored a distinction at his SSC examination, Pujyashree Bhupendrabhai decided to take up the science field for higher education. He joined Elphinstone College where he majored in Chemistry. He was popularly known as ‘Wrangler’ because of his authority over Mathematics. This accounts for his clear logic. Even in college, he was an active participant at inter-collegiate elocution, debates, poetry writing and literature competitions where he always secured the first prize. He was also elected as the Chairman of the students body in his college. He wrote many articles in Sanskrut and poems in Gujarati for ‘Elphinstonian’, the college magazine. During the celebration of Sanskrut day, he recited the entire Geeta with the right diction. He even directed Sanskrut plays to encourage students to learn the language. He was an active participant at various youth seminars. He graduated from Bombay University in the year 1984. He then went ahead to study Law as well as Management.

As a child, Pujyashree Bhai more often than not, accompanied his parents to listen to the discourses delivered by learned saints like Param Pujya Dongreji Maharaj and Pandurang Shastri Athavale. On hearing them, his young mind relished every word he heard and his intellectual appetite absorbed and digested the underlying meanings. He could narrate the discourses he heard ad verbatim even when he was just five. Since he idolized Param Pujya Dongreji Maharaj, he often imitated his style of delivering lectures while he was at play with his mates. Elders gathered to hear him and considered him to be an unusually gifted child. At that young age he would give an interesting twist to the regularly told ‘satyanarayan Katha’ through various examples so that people would get interested in the otherwise routine ritual. For Pujyashree Bhupendrabhai, this came effortlessly. Here one could perceive the traits of a born preacher. Meanwhile, his habit of reading continued. He read and studied various scriptures including the Vedas, Geeta, Upanishads etc. in original Sanskrut as well as other languages. He contemplated on them, transforming ancient wisdom into easily understandable principles for the common man. After having completed his SSC board examinations, for the first time Pujyashree Bhupendrabhai decided to become a religious preacher. He was just fourteen when he gave his first discourse on the Geeta. Initially, he preached at regular study circles on subjects like Upanishads, Geeta, Vedas, Bhagavat etc. to an intellectual audience comprising of doctors, engineers, chartered accountants, lawyers, architects and teachers. These discourses gave the intelligentsia of Mumbai a deep understanding of the valuable principles present in our scriptures. Pujyashree Bhai joined Dena Bank in 1984. He worked at the bank’s main office in Flora Fountain for 8 years. Even while he worked at the bank, he continued to give discourses after office hours. His love for religion and spirituality won over his desire to work at the bank. Finally, in 1991 he quit his job and ever since this ‘Gift’ from God to society has been constantly illuminating our path with his enlightenment and philanthropy and today we cherish him as the religious preacher that we can truly look up to!