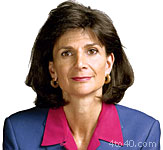 Patricia Russo — Patricia F. Russo was born on 1953 in Trenton, New Jersey. She is an American businessperson most widely known for having served as chief executive officer of Lucent Technologies and its successor, Alcatel-Lucent, a large communications equipment manufacturer.

Forbes magazine rated Russo as the tenth on its list of the most powerful women in 2006.

Russo joined Lucent’s predecessor in 1982. In 1992 she became the president of its Business Communications Systems division, moving in 1997 to become its executive VP of corporate operations, and in 1999 to its executive VP and CEO of the Service Provider Networks Group She left in August 2000, after a reorganization, but returned in January 2002 to become its CEO. After “cutting costs and focusing on sales of wireless equipment, Russo was credited with returning Lucent to profitability in 2004, after three years of red ink.”

On April 2, 2006 it was announced that Russo would assume the CEO role of a new combined company resulting from the merger of the French communications company Alcatel and Lucent. This merger became effective on December 1, 2006. When Russo became the CEO of the combined company, Serge Tchuruk, the former CEO of Alcatel, remained as Chairman.

On July 29, 2008, Russo, along with Alcatel-Lucent chairman Serge Tchuruk, announced that she would step down by the end of 2008, in a broad-reaching management restructuring. Significant changes in the composition of the company’s board were also announced. Alcatel-Lucent shares lost more than 60% of their value in the year preceding her departure. In the statement released by Alcatel-Lucent relating to her departure, Russo was quoted as saying, “The company will benefit from new leadership aligned with a newly composed board to bring a fresh and independent perspective that will take Alcatel-Lucent to its next level of growth and development in a rapidly changing global market.”

On September 2, 2008 she was succeeded by Ben Verwaayen.

Russo spent nine months as the COO of Eastman Kodak, a position she left in January 2002 when she returned to Lucent to become their CEO.

On July 23, 2009 General Motors announced that Russo would be a member of the company’s new Board of Directors.

Share
Previous Why does water not soak into our skin?
Next फैसला