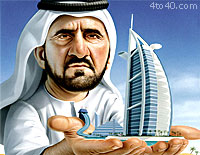 He is the third of Rashid bin Saeed Al Maktoum’s four sons (members of Dubai’s ruling family Al Maktoum and descendants of the House of Al-Falasi, of which he is the tribal leader). From the age of four, Sheikh Mohammed was privately tutored in Arabic and Islamic Studies. In 1955, he began his formal education at Al Ahmedia School. At the age of 10, he moved to Al Shaab School, and two years later, he went to Dubai Secondary School. In 1966, he and his cousin, Sheikh Mohammed bin Khalifa Al-Maktoum, attended the Bell Educational Trust’s English Language School in the United Kingdom.

His senior wife is Sheikha Hind bint Maktoum bin Juma Al Maktoum whom he married in 1979. His best-known junior wife is HRH Princess Haya bint Al Hussein, daughter of King Hussein of Jordan and half-sister of current King Abdullah II of Jordan, whom he married on April 10, 2004, and has one child, a daughter, AlJalila, born December 2, 2007. Sheikh Mohammed has 19 officially acknowledged children: eight sons and eleven daughters.

Al Maktoum, his sons, and his daughters are known to be avid in the art of traditional Arabic poems, arts, taking part in projects to aid developing countries such as Jordan, Egypt, the Palestinian Authority and Yemen. They are also sport enthusiasts, especially in horse and camel racing. For example, in the 15th Asian Games in 2006, son Rashid took the individual gold in Endurance, sons Rashid, Ahmed, Majid, and Hamdan took the team gold in Endurance; niece Latifa took a bronze in Show Jumping; and daughter Maitha led the UAE team in taekwondo .

Sheikh Mohammed is a major figure in international thoroughbred horse racing and breeding. In late 1981, he purchased Gainsborough Stud at Woolton Hill, near Newbury, Berkshire, United Kingdom. He owns Ballysheehan Stud in County Tipperary, Ireland. He also owns Gainsborough Farms Inc in Versailles, Kentucky. His racing operations includes the ownership of Darley Stables and he is the leading partner in his family’s Godolphin Stables. Sheikh Mohammed hosts the Dubai World Cup, the world’s richest series of horse races.

In the UK, his horses have won numerous important Group One races including several of the British Classic Races. His horses have also won the Irish Derby Stakes and the Prix de l’Arc de Triomphe and in the United States the 2006 Preakness Stakes with Bernardini.

He recently bought the Woodlands Stud empire, the largest in Australia, for $US 420 million.

Sheikh Mohammed oversaw the development of numerous projects in Dubai including the creation of the Palm Islands and the luxury Burj Al Arab hotel. He is also promoting the construction of Burj Khalifa, which is now the tallest free-standing structure in the world, world’s tallest building; its official opening was on Monday, 4 January 2010. During his tenure as Crown Prince he set up Dubai Holding, a holding company with multi-diversified businesses and investments. He currently owns 99.67% of the company.

Sheikh Mohammed bin Rashid Al Maktoum has been known for his vast charitable donations. On May 19, 2007, he announced plans to give $10bn USD to set up the Mohammed bin Rashid Al Maktoum Foundation, an educational foundation in the Middle East, one of the largest charitable donations in history. Sheikh Mohammed stated that the money is meant to bridge the knowledge gap between the Arab region and the developed world, improving the standard of education and research in the region, developing leadership programs for youth, and stimulating job creation. The announcement was made at the 2007 World Economic Forum in Jordan. His total net worth at present, however, is said to be only $18bn.

In September 2007, he launched the Dubai Cares campaign to raise money to educate 1 million children in poor countries. The campaign is Dubai’s contribution to the U.N. Millennium Development Goals for providing Children’s Primary Education to every child by 2015. The amount donated to this campaign has exceeded AED 3.4 billion (Approximately US$ 910 million).

In September 3, 2008, Sheikh Mohammad also launched a new Ramadan initiative under the name “Noor Dubai”, aiming to help the World Health Organization (WHO) and International Agency for the Prevention of Blindness (IAPB) in achieving its goals outlined in VISION 2020: the Right to Sight Noor Dubai will treat and provide health services to one million people suffering from treatable blindness and visual impairment in developing countries on a local, regional, and international scale.

On 9 March 2007, the London-based Metro newspaper wrongly published a picture of Sheikh Mohammed, attributing it to the terror suspect Khalid Shaikh Mohammed. The Metro has since apologized for the error.

Sheikh Mohammed has been accused of encouraging the abduction and enslavement of thousands of boys for use as jockeys in camel races. A class-action suit was filed in the United States in an effort to bring him to justice. However, in 2006, American lawyers representing the UAE raised a motion to dismiss the lawsuit, not on its substance but on the grounds that none of the involved parties resided in the U.S. In July 2007, judge Cecilia Altonaga accepted the motion and dismissed the suit.

Since 2000, international equestrian athletes affiliated with UNICEF have worked to end the “scourge of modern slavery in mounted sports,” by putting public and diplomatic pressure on Sheikh Mohammed and the UAE government.

In 2005, a UNICEF-sponsored programme with the UAE government resulted in the repatriation of hundreds of children formerly enslaved as camel jockeys, and provided them with social services and compensation upon return to their home countries of Pakistan, Sudan, Mauritania, and Bangladesh. The UAE government set aside $2.7 million in initial funding in 2005 with an additional $9 million for the second phase, and to enforce compliance, adopted a law officially banning the practice with penalties of jail time and a $27,200 fine. UNICEF endorsed the UAE’s efforts and expressed the hopes that “the UAE’s programme will serve as a model to other countries in the region, as a means of ending all forms of exploitation of children”.

Share
Previous Who are the tallest and shortest people?
Next Who came up with the concept of vacuum?