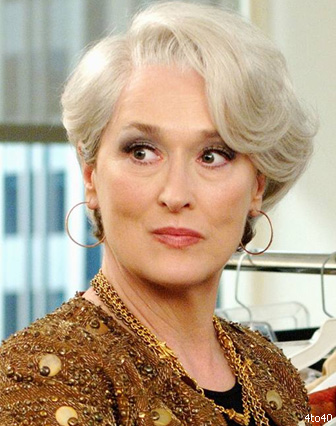 Meryl Streep — Mary Louise “Meryl” Streep (born June 22, 1949) is an American actress and singer who has worked in theatre, television, and film. She is widely regarded as one of the most talented and respected actresses of the contemporary era.

Streep made her professional stage debut in 1971’s The Playboy of Seville, before her screen debut in the television movie The Deadliest Season in 1977. In that same year, she made her film debut with Julia. Both critical and commercial success came quickly with roles in The Deer Hunter (1978) and Kramer vs. Kramer (1979), the former giving Streep her first Oscar nomination and the latter her first win. She later won an Academy Award for Best Actress for her performance in Sophie’s Choice (1982).

Streep was born Mary Louise Streep in Summit, New Jersey. Her mother, Mary Wolf (née Wilkinson; 1915 – 2001), was a commercial artist and former art editor, and her father, Harry William Streep, Jr. (1910 – 2003), was a pharmaceutical executive. She has two brothers, Dana David and Harry William III. Her patrilineal ancestry originates in Loffenau, Germany, from where her second great-grandfather, Gottfried Streeb, emigrated to the United States, and where one of her ancestors served as mayor. Another line of her father’s family was from Giswil, a small town in Switzerland. Her maternal ancestry originates in Pennsylvania and Rhode Island, and partly traces back to 17th century immigrants from England. Her eighth great-grandfather, Lawrence Wilkinson, was one of the first Europeans to settle Rhode Island. Streep is also a distant relative of William Penn, the founder of Pennsylvania, and records show that her family were among the first purchasers of land in the state.

She was raised a Presbyterian, and grew up in Bernardsville, New Jersey, where she attended Bernards High School. She had many school friends who were Catholic, and regularly attended Mass because she loved its rituals. She received her B.A., in Drama at Vassar College in 1971 (where she briefly received instruction from actress Jean Arthur), but also enrolled as an exchange student at Dartmouth College for a quarter before it became coeducational. She subsequently earned an M.F.A. from Yale School of Drama. While at Yale, she played a variety of roles onstage, from the glamorous Helena in A Midsummer Night’s Dream to an eighty-year old woman in a wheelchair in a comedy written by then-unknown playwrights Christopher Durang and Albert Innaurato.